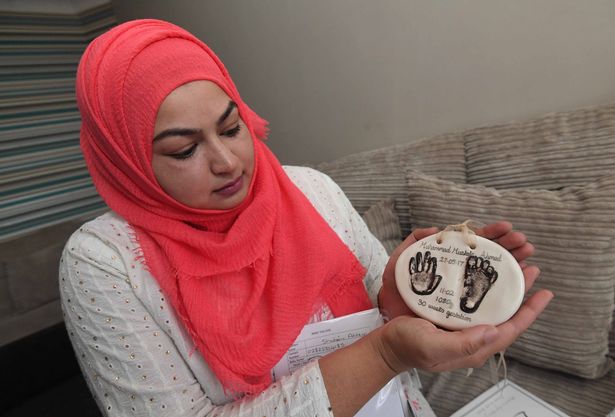 A Heartbroken mum had to make funeral plans before her baby was born.

Shabina Akhtar, 34,  from Birmingham who gave birth to a beautiful baby boy had just two precious hours with him before he tragically died in her arms.

Shabina was told at 20 weeks of her pregnancy that her baby had Potter’s Syndrome, a fatal condition where the kidneys fail to develop and was offered to terminate but wanted to give her baby a chance of survival.

Shabina had to prepare for the worst and started making funeral arrangements for her baby while she was still pregnant.

She says she treasures those precious minutes she had with baby Mohammed, and has no regrets about her decision.

“At the scan I was told that there was no amniotic fluid around the baby, and he had no kidney,” she recalls.

“They said he ‘wasn’t viable with life’, and offered me a termination.

“I had never even heard of Potter’s Syndrome, and many babies who have it are stillborn.

“It was horrible. You get past the 12-week mark, and you think after that everything will be OK, and your baby will just get stronger and grow

“But because of my religion I didn’t feel I had the right to make that decision, so I continued with the pregnancy.

“There was also a small part of me that had a glimmer of hope that the diagnosis might be wrong.”

Shabina told her family, who supported her decision and helped her to make arrangements.

Medics told her that her little boy wouldn’t survive, and they did their best to make him comfortable.

He survived for two hours and 19 minutes, and as he took his last breath, Shabina cuddled him in her arms.

“I wouldn’t change it for the world. I have no regrets,” she says.

“He was so small and precious. I held him until his last breath.”

The next day, as with Muslim religious traditions, Mohammed’s funeral took place.

Sadly for Shabina, she had suffered a blood clot during labour, and was unable to attend his burial.

“My sister stayed with me, and I was actually having a CT scan at the time, as I’d got a clot in my lung,” she explains.

“But the bereavement nurses at Heartlands were amazing. They really helped me.

“They were there for me during my darkest hours, and I will never forget their kindness.”

Shabina is raising money for the Eden Suite, the bereavement ward that helped her through the tragedy.

She is raising money for a CuddleCot – a moses basket with a built-in cooling unit.

It helps stop a baby’s body from deteriorating, so that grieving parents can spend longer with their newborns who have died.

“But I know it would have made a huge difference to us.

“That’s why I wanted to raise money for a new CuddleCot on the Eden Suite. I know it will really help other families who sadly will go through what we did.

“To have that extra time would have meant so much. I could have changed his clothes, and had more time to spend with him.

“The subject is still taboo in a lot of communities, including in the Asian community, so I think it’s really important to share my experience.

“Often people don’t know what to say to you, but I want people to know it’s good to be open.

“It has affected my eldest daughter quite a lot, but I tried to explain that some babies are special and go to heaven.

“It means a lot to us all that we can give something back.”

Shabina has raised more than £2,300 in Mohammed’s memory, and she will be presenting her donation to nurses at the Eden Suite .

Sian Averill, Fundraising Manager at Heartlands Hospital Charity, says: “The charity’s heartfelt thanks go to Shabina for her hard work in raising such a fantastic amount of money. Thanks to the generosity of fundraisers such as Shabina, the charity has been able to provide CuddleCots for the suite.

“A CuddleCot keeps the baby cool, which extends the window of time that parents have to make memories with their baby, with the support of the specialist bereavement midwives on the unit.

“The CuddleCots are so important for the ward – they give families that precious time with their babies that they wouldn’t be able to have otherwise.

“None of this would be possible without the support of people like Shabina, who enable the charity to go ‘over and above’ for mothers and their families on the Eden Suite.”

* If you would like to donate to the Eden Suite at Heartlands you can visit Shabina’s Just Giving fundraising page at or go to www.hospitalcharity.org.