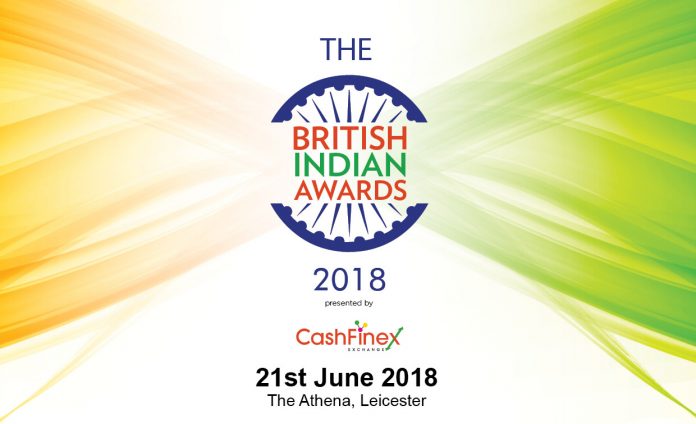 Finalists for the 6th annual British Indian Awards 2018 presented by CashFinex have been revealed after nominations have flooded in from across the country and beyond.

The awards aim to acknowledge and reward the effort of British Indian community across sectors ranging from Entrepreneur of the Year to Best Entertainer with 24 different categories overall this year.

The ceremony is due to be held on the 21st of June at the glamorous Athena in central Leicester and will include a drinks reception, four-course meal and entertainment.

Title sponsors, CashFinex, are an international organisation based in the UK who are responsible for an innovative way in which to make and accept payments, whilst remaining secure and simple to use.

Mohsin Jameel, CEO of Bull InfoTech the company behind CashFinex, said: “We are really pleased to be the title sponsor of the British Indian Awards; the partnership comes at an exciting time for the business. We’ve just launched our new exchange which gives investors and businesses the opportunity to trade in the cryptocurrencies and forex from a single platform.

“The British Indian Awards provide a perfect stage to reach out to innovators, entrepreneurs and community representatives that the awards aim to recognise.”

The event is being run by Oceanic Consulting, the UK’s leading ethnic consulting and promotions organisation in the UK, who have recently been shortlisted at the Asian Media Awards 2017 for their work in the Marketing & PR Sector, and are responsible for some of the most successful and well known events in the country such as The English Curry Awards, British Muslim Awards and the English Asian Business Awards amongst others.

Irfan Younis, CEO of Oceanic Consulting said: “The British Indian industry continues to expand and flourish year upon year with many now taking up their profession on a full time basis which is testament to the impact the industry is having to the economy overall.”

This awards ceremony is also part of the Diversity Awards group which provides a platform for and celebrates the achievements of ethnic minority communities throughout the UK and is responsible for The British Muslim Awards which has been running for the last six years.

The evening will also help to raise funds for official charity partner, Magic Bus, a charity which provides young people living in poverty with the opportunity to complete their secondary education and develop the skills necessary to transition and succeed in the workplace in an attempt to break the cycle of poverty which these young people often get trapped in.

The finalists for the British Indian Awards 2018 are:

Behind the Netra (London)

Indian Spirit in the Community

Young Achiever of the Year

Family Business of the Year

Best Charity of the Year

Businesswoman of the Year

Businessman of the Year

Business of the Year

Entrepreneur of the Year

Indian Man Of The Year

Entertainer of the Year

Women of the Year

Pavan Amara  (My Body Back, London)

Young Entrepreneur of the Year

Tanisha Mehta (My Own Chemist, Middlesex)

Creative Entrepreneur of the Year

Wow Business of the Year