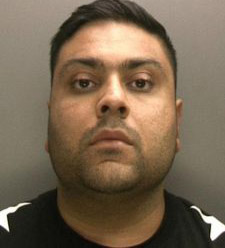 Kamar Farooq was jailed after a high-speed pursuit in which he reached speeds of up to 115mph before crashing.

Farooq, of Aston, Birmingham, was driving a BMW M3 when speeding away from police after they attempted to stop him last September.

The 30-year-old drove through parts of Solihull with police recording him driving at the exorbitant speeds in 30mph zones.

West Midlands Police said the pursuit ended on Chester Road, Castle Bromwich, when Farooq crashed the vehicle the vehicle into a traffic island before careering into a career at a petrol station.

After that, Farooq climbed into the back seats of the car alongside two men and claimed to have been a passenger.

Footage from earlier in the evening showed clothes worn by the driver matched those worn by Farooq, according to police.

“This was reckless driving by someone who should not have been behind the wheel,” said PC Robert Lattimer of the roads policing unit.

“Officers had suspicions around the vehicle and tried to pull it over; but Farooq failed to stop and hit speeds of 115mph in 30mph zones.”

Farooq was convicted at Birmingham Crown Court, jailed for two-and-a-half years for dangerous driving and driving whilst disqualified, and was banned from driving for ten years.