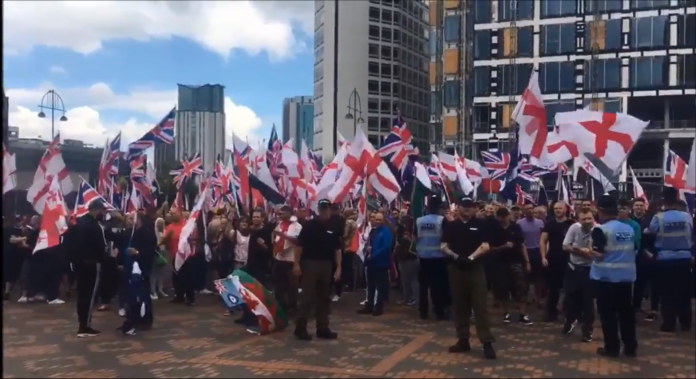 As expected, the scene of the Britain First protest march in Birmingham turned ugly as smoke bombs, clashes and abuse.

The Britain First group marched from Grosevenor Casino to Centenary Square and were met by multiple anti-fascist groups.

Multiple anti-fascist groups were waiting for their arrival, where tensions immediately flared. Opponent groups had the march corralled and arguments broke out amid the speeches. Then things turned ugly when a Britain First member lobbied a smoke bomb at the anti-fascists who responded by pelting back water bombs.

They hurled angry abuse at one another- with some chanting Nazi slogans- as the police frantically rushed to control the situation. In one video posted to social media, a young man can be seen being taken away by two police officers for verbal abuse.

The groups were kept apart by police lines and vans and were successful in controlling any further outbreak.

As the march pressed on towards the Mailbox, an Asian man was recorded goading and taunting the far-right group. He was promptly escorted away by police. A handful of fights broke out were quickly contained by police.

Jayda Fransen, leader of Britain First, said: “I think it’s gone well. I would say that today really has exposed the police in Birmingham for what they’re all about which is they’re not interested in keeping public order for these marches.

“What they’re interested in is appeasing the left who have been allowed to get within feet of our activists. We’ve got children with us today and thankfully everyone is unharmed.”

“I felt it was a shame that Britain First were allowed into Birmingham because the resources that went into policing them must have been astronomical. That money could have been spent on other things like homelessness or other amazing projects that are running.

It’s something we can try and work on in the future, to try and restrict groups like that coming in. We as volunteers worked with the local police and helped calm some of the protestors. It went off without any major incidents. A lot of potential confrontations were diffused.”