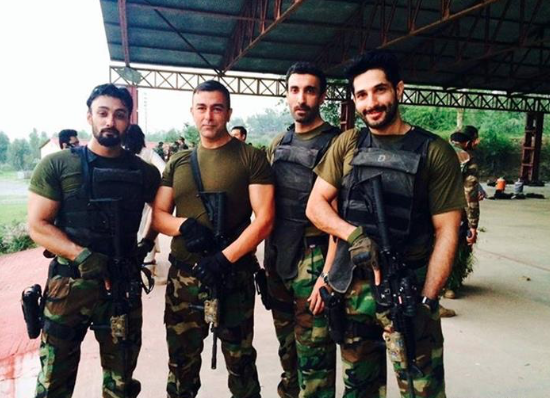 Yalghaar, one of the biggest releases to ever come out of the Pakistani film industry, is based on the true story of a military operation in one of the most difficult terrains of the Swat valley against an extremist stronghold.

Pakistani superstar Gohar Rasheed, who was nominated for Best Actor in a Supporting Role at the 2012 New York Film Festival, shares his opinions on the Pakistani army, who the cast spent time with while filming.

Rasheed says: “Whatever misconception there is about them, the army, I didn’t see that. They are aggressive and strict like people say they are. They are really sweet. They invited us to dinner in their homes; they introduced their families to us. They are very nice people.”

Ashraf says: “The actual reason behind the delay was the shoot. We lived with the soldiers during the shoot. We use their equipment, their choppers, their men, everything. If anything, God forbid, had to happen. The priority becomes the safety, obviously. The film used to be set on the back burner.”

The casts are evidently very proud of the work they put into this film. Ashraf adds: “I have just returned from the colour grading session in London. Yalghaar is a hit, no doubt about that.”