Punjabi breakthrough star Rameet Sandhu is back with her brand new track; Talli Hogaya! We sat down with the singer, actress and Miss India Scotland to find out about her new song, her music career and what she has lined up for 2017.

So tell us about your new single.

My new single is a Punjabi/Bollywood track called Talli Hogaya and it’s with Dr Zeus and Dr Dre’s son Curtis Young featuring on it.

And how was it working with Dr Zeus and Curtis Young?

Working with Dr Zeus has been absolutely amazing he’s such a humble guy and I had no complaints he’s so talented and so creative as well I was blown away. Working with Curtis Young, I’ve actually been working with him for three years, we’ve recorded songs which are unreleased so I thought I’d bring him onto this track as well and bring on Dr Zeus. I wanted to bring something new to the industry.

What was the idea behind the music video?

I wanted to do something different to my other music videos, I’ve always had a storyline and a traditional style but I thought for this music video, I’m going to go for something a bit more mainstream. Curtis has come all the way from LA so I wanted to have a mainstream touch to it.

You’re clearly multitalented, being an actress and Miss India Scotland, so what made you want to do singing as well?

Have you ever faced any obstacles or setbacks in your career?

Yes, I think being an Asian female is always going to be an obstacle in this career. Not everyone from your family supports you. I have my mom, my dad and my brother and they’re very supportive, but then there’s some other members who don’t support you and you always feel criticised, you always feel bad. But now I’ve come to a point where all I need is my mom, my dad and my brother. It is very, very hard, especially with me being from Scotland, meeting producers and getting to know them is very difficult and getting the right sound, getting the right song. You have to spend a lot of money on the project as well and you want to make sure everything’s tiptop, everything’s right.

“There’s some other members who don’t support you and you always feel criticised, you always feel bad. But now I’ve come to a point where all I need is my mom, my dad and my brother.” 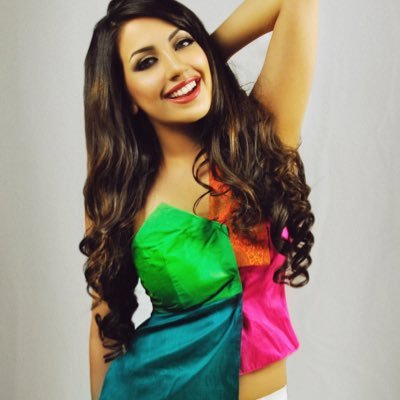 What’s it like dealing with people that have misconceptions about you being an Asian girl?

It used to bother me a lot early in my career. Being an Asian, I should sit in the house and do cooking or become a lawyer or doctor. But I always wanted to do singing and acting, my mum always supported me from a very young age. I’m totally inspired by her drive and she really pushed me and I’m so happy I’ve decided to stick by it as well.

On top of your mom, who else would you say is your inspiration?

My dad and my brother. I’m also inspired by Miss Pooja. I think her singing is absolutely phenomenal and she struggled a lot in her career but look at her now, she’s very happy and successful.

What would you say your ultimate goal is? Could you see yourself breaking into western mainstream?

I think working with Curtis Young is already a step in the right direction. We’re going to be working together on future projects and he wants me to come onto the mainstream side of things too

My ultimate goal is to become a successful singer and actress and yes, I think working with Curtis Young is already a step in the right direction. We’re going to be working together on future projects and he wants me to come onto the mainstream side of things too, which I’m totally open with. I’m not just sticking with one genre I’m open to everything.

What do you have coming up?

I’ve got my Punjabi film releasing in February, I’ve also got three songs releasing this year and I’ve got two films as well. I’ve got a lot coming out this year and signing with T-Series was such a big deal for me and I’ll be releasing songs constantly. One thing I want to mention is I’m also performing with Dr Zeus and Curtis Young at the Brit Asia TV World awards as well, which is happening in March. I’ll be performing my brand new single and something which is also very different and will be making a really big impact.

Yes, it’s releasing on February 10th and I’ve also got a role in there which I worked very, very hard for. I hope everyone loves it just as much as I do.

Please support my music, Talli Hogaya is releasing on the 27th January and I’ve got a lot of things coming out this year so please support!