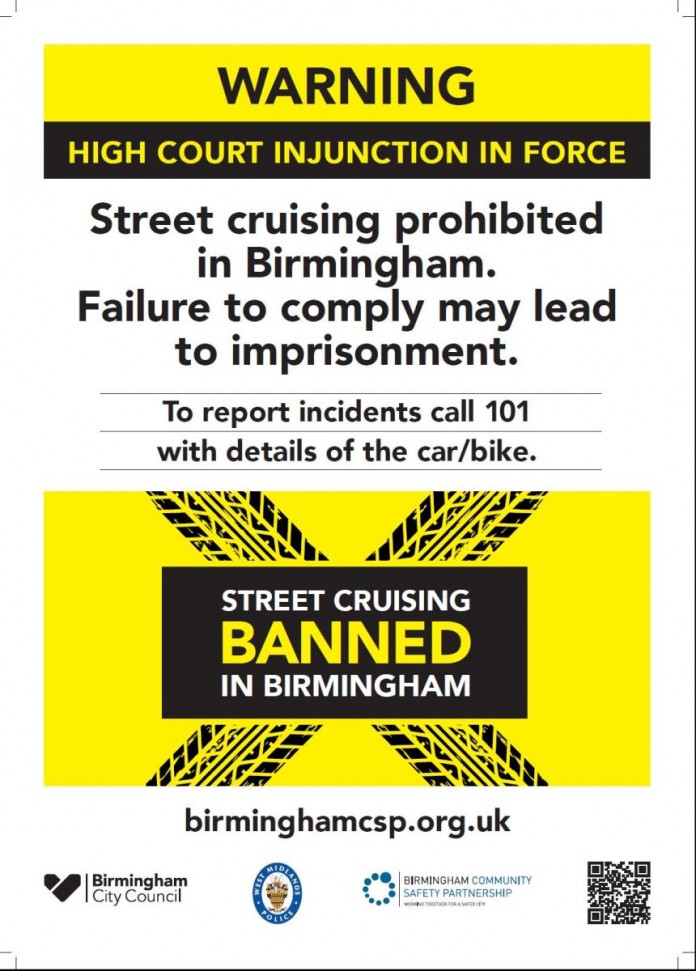 The streets and suburbs of Birmingham have been hit with anew blight in recent years in the form of illegal street racing, cruising and general motor nonsense.

Thankfully new measures are being implemented by West Midlands Police that could see such unruliness stamped out. A High Court Order secured by WMP and Birmingham City Council will see those partaking in racing, unauthorised rallies and also acting aggressive on the roads by way of unnecessary revving, wheelies, stunts,  horn blaring, music blasting and riding in convoy held in contempt and brought before a judge.

These new sanctions will be enforced across all over Birmingham. Similar sanctions are already in place in Solihull and the Black Country.

“This latest move is all part of Operation Hercules – a real collaborative approach involving traffic cops, local officers, and neighbouring forces to tackle motorists and bikers who pose a danger to other road users.

“We’ve taken strong action in the past on street racers, with hundreds taken to court, banned from the roads and handed hefty fines. But recently we have started to see groups of bikers – many on scramblers and mini moto’s – causing a nuisance on our streets, pulling wheelies and intimidating other drivers.

“This injunction will cover all aspects of anti-social motoring – including people who organise or promote road cruising events – and people need to realise it’s not acceptable and they could end up in court.”

Signs will be erected in major landmark and high traffic areas, including the A38, A45, and A47 Fort Parkway.  Councillor Waseem Zaffar, a cabinet member of Transparency, Openness and Equality in Birmingham, said:  “We take street racing very seriously as innocent lives are at risk. Anyone who races on Birmingham’s roads needs to know they will be prosecuted, are likely to lose their licence, face a fine running into thousands of pounds and possibly imprisonment.

“We will also consider tenancy enforcement action for tenants or family members identified as being offenders in breach of this injunction.”