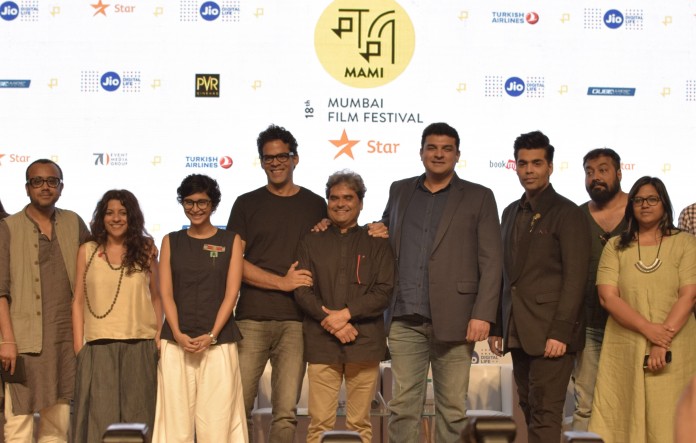 Over 180 films from 54 countries including features, documentaries, short films to be showcased at the festival

The Film Festival will honour director and screenwriter Sai Paranjpye and acclaimed filmmaker, Jia Zhangke with ‘Excellence in Cinema’ Award

Mumbai, September 29, 2016: The Jio MAMI Mumbai Film Festival with Star is less than a month away from offering the city a movie extravaganza unlike any other. In its 18th edition, the festival announced its stellar line-up for the year at its annual press conference held on Thursday, 29th September in Mumbai. The festival is set to kick off on 20th October. The press conference began with the announcement of the festival’s new brand identity.

Jio MAMI with Star, Festival Co-Chairperson, Kiran Rao said, “It’s been a very exciting year for the Academy.  Firstly, we are now a year around presence.  We launched the MAMI Film Club in May with a conversation between Sir Ian McKellen and Aamir.  We’ve followed that up with India premieres of films such as Brahman Naman and India in a Day.  The Academy is committed to bringing you great film content and conversations not just in October but through the year. We’ve also got a new identity.  Mumbai is a mosaic of islands and communities, of over 16 million people, their hopes and dreams.  We wanted to find an identity that reflects this great city and the festival.  If you look closely at our new logo, you will see two fish creating a geometric pattern that forms the Devnagri representation of MAMI.  This identity also works well for us because we are always fishing for talent!”

Mrs. Nita M. Ambani, Founder and Chairperson, Reliance Foundation & Co-Chair, MAMI Board of Trustees said, “Welcome to Jio MAMI – the 18th Mumbai Film Festival. Cinema acts as a game changer, inspiring and influencing lives and making a positive contribution to the society. The advent of digital technology is taking filmmaking to a higher level, with innovative opportunities and techniques for creative expression and viewership. I have no doubt that this digital way of life will help the world of content creation in a big way. Let this edition of the much-awaited Jio MAMI festival continue to add value to the film fraternity and audiences in India.”

Uday Shankar, CEO, STAR India said, “I have always believed that the media and entertainment industry has a very important role in shaping society and cultural consciousness. We at Star believe in the potential of stories to stimulate imagination and influence societal change moving the nation forward. MAMI brings such exemplary stories to life with world class cinema especially curated for the festival. This will be our third year of association with MAMI and together we hope to connect the city to world-class content and provide an amazing platform for young, creative talent.”

Gayatri Yadav, Executive Vice President, Marketing and Communications, STAR India said, “This is our third year and it’s really something we strongly believe in. We strongly believe in the vision, the brand and the people behind it. Star’s vision is to inspire a billion imaginations and there is nothing more central to inspiring imaginations to shape our nation’s cultural consciousness toward films.”

The festival, as it does every year, identifies the contribution of great minds in the world of cinema. The ‘Excellence in Cinema Award’ provides a great opportunity to highlight, applaud and promote works of such individuals. This year, the Indian Excellence in Cinema Award will be conferred to the noted director and screenwriter of several award winning movies like Sparsh and Chashme Baddoor, Sai Paranjpye. The Government of India awarded Sai with the Padma Bhushan title in 2006 in recognition of her artistic talents. Jia Zhangke, known as the leading figure of the “Sixth Generation” movement in Chinese Cinema and one of the most critically acclaimed filmmakers working today will be the recipient of the International Excellence in Cinema Award.

Actor, Director Dibakar Banerjee said, “Each year, the Jio MAMI Mumbai Film Festival with Star gives two Excellence in Cinema awards.  This year, our international award goes to Chinese director Jia Zhangke.  Jia Zhangke belongs to the sixth generation of Chinese filmmakers.  His work has offered a unique perspective on a transitional generation.  He combines this with a humane concern for the working class and poor.  Jia Zhangke has directed 13 films in 21 years. His works continue to break boundaries and move the world.”

Filmmaker Vishal Bharadwaj said, “Our Indian Excellence in Cinema award goes to filmmaker Sai Paranjpye. Sai Paranjpye’s career has spanned over four decades. Her are milestones in Indian cinema. Sai’s cinema is defined by certain humanity. Her films didn’t have oversized heroes and villains.  She told slice of life stories about common people. Her work continues to inspire generations of filmmakers.”

Director Zoya Akhtar announced the jury for the Jio MAMI with Star’s competition category, India Gold.  “One of the primary functions of the festival is to serve as a gateway to the best of Indian cinema.   Here’s our India Gold jury.  This section also carries award money of 45 lakh. Joining the jury this year is composer Mychael Danna who won both the Oscar and the Golden Globe for Life of Pi. Time magazine film critic Stephanie Zacharek, Taiwanese film director and photographer Yonfan and the head of the jury is Turkish film director Reha Erdem, who has been called Turkey’s most philosophical and contemplative filmmaker,” said Zoya Akhtar.

Introducing a new programme at the festival that brings films from one, select country every year, Director Anurag Kashyap said, “This year, the Jio MAMI Mumbai Film Festival with Star will include a new programme, Country Focus. This year the country in focus is Turkey. The festival will screen 10 films from Turkey, which represent the different strains of cinema in the country.  The selection will include films of the Turkish New Wave and directors like Zeki Demirkubuz and Nuri Bilge Ceylan.  It will also have classics like The Bride from 1973.”

This year, the festival acknowledges the contribution of women in the film industry and in order to strengthen its efforts to ensure that these women get the recognition they deserve, the festival introduces new awards.

Announcing the new award at the festival this year, Siddharth Roy Kapur, MD, Disney India said, “This year, Oxfam India in partnership with the festival has instituted an award for 10 lakh rupees for Best Film on Gender Equality.  The award category focuses on films that challenge gender based social norms, which lead to gender inequality and hence to the global pandemic of violence against women and girls.  The Indian film industry is one of the most significant influencers in Indian society.  Oxfam India aims to encourage and recognize professional filmmakers who make cinema, which promotes positive gender norms and inspires people for a future where violence against women and girls no longer exists.  This is only open to Indian films programmed at the festival.”

Filmmaker Karan Johar said, “We are also thrilled to announce a special award this year called the MAMI MasterCard Best Indian Female Filmmaker 2016 award. This award for 15 lakh rupees is also for Indian films only. This award aims to strengthen the female voice in Indian cinema. Over the last five years, we’ve made some progress here but it’s much too little. The representation of both genders onscreen can only benefit with the inclusion of more female voices.  This award is a step toward that.”

Announcing the few names from the international films line-up that will be screened at the festival this year, Director and Producer, Rohan Sippy said, “Few of the exciting titles in our International Selection are: ‘I, Daniel Blake’ by Ken Loach, ‘Swiss Army Man’ by Daniels, ‘Certain Women’ by Kelly Reichardt, ‘Graduation’ by Cristian Mungiu, ‘Things to Come’ by Mia Hansen-Love, ‘Elle’ by Paul Verhoeven, ‘Neruda’ by Pablo Larrain, ‘Mostly Sunny- A Documentary on Sunny Leone’ by Dilip Mehta and ‘Hema Hema: Sing Me A Song While I Wait’ by  Khyentse Norbu from Bhutan.”

Present at the press conference, Film Producer, Manisha Mundra said, “Some of our Indian titles are: ‘A Death in the Gunj’ By Konkona Sen Sharma, ‘Lady of the Lake’ by Haobam Paban Kumar, ‘Loev’ by Sudhanshu Saria, ‘Autohead’ by Rohit Mittal, ‘The Cinema Travellers’ by Shirley Abraham and Amit Madheshiya, ‘Lipstick Under My Burkha’ by Alankrita Shrivastav.”

Jio MAMI with Star, Festival Director, Anupama Chopra said, “This year, the JIO MAMI 18th Mumbai Film Festival with Star will also be bigger and hopefully better.  The MAMI Movie Mela will now be two days.  Our section for children Half Ticket will be open to the public on certain days.  Our experimental film section is now called The New Medium.  It includes some very exciting titles that offer new ways of seeing film.  We also have a Word to Screen Market, which puts book publishers and content creators into the same room.  And our book award now includes books on cinema in Hindi also. The festival will screen over 175 films from 54 countries.  The festival is going to be a movie feast.  This is an inclusive film festival so no matter what your taste is – there will be a film for you.”

Jio MAMI with Star, Creative Director, Smriti Kiran said, “With every passing year, we at Jio MAMI with Star strive to bring exciting programmes that will appeal to everyone; from filmgoers to aspiring filmmakers. To continue this tradition, the festival will introduce new programmes and screenings that will bring the best of cinema around the world to Mumbai. We have some of the greatest minds in the global film industry joining us in championing the festival. While the film screenings remain at the heart of the festival, the roster this year will also feature programmes that will touch upon various aspects of the entertainment industry. We are thrilled to announce Jio MAMI with Star 2016 programming line-up with you today and we look forward to putting up a spectacular show!”

Starting 19th August, when the call for entries was announced, the Jio MAMI 18th Mumbai Film Festival with Star received an unprecedented number of entries for the movies this time. The jury members selected the best films and have taken a decision to screen nearly 180 films in feature/documentary/short films categories.

Other Important Announcements made: