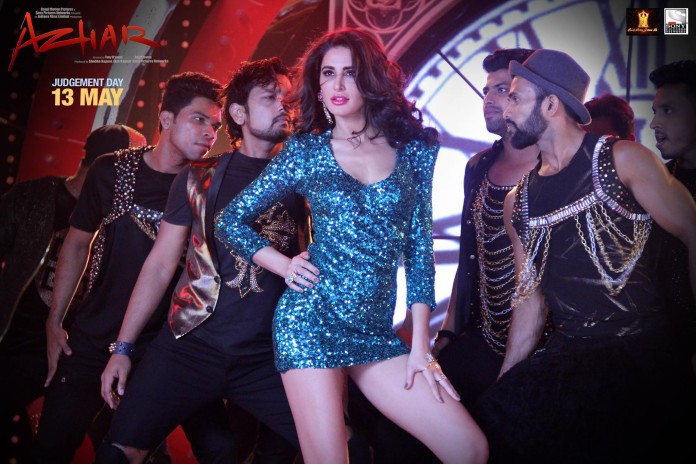 Bollywood has always loved its film stories inspired by true life. When you decide to tell the story of a cricket legend using Bollywood stars you can hardly go wrong. Azhar which is based on the life of an outstanding cricketer Mohammad Azharuddin, shows not just his professional journey but also his personal life. Nargis Fakhri who will essay the role of Sangeeta Bijlani in the film ‘Azhar’ has set the glamour quotient a notch higher with her song Oye Oye. Nargis is setting the stage on fire in the revised version of the iconic 90’s hit. Considering that Sangeeta was one of the most popular starts of her time and Tridev being one of her most popular movies, it is not a surprise that this iconic number was chosen to be recreated. Though the set is quite different from its 90s counterpart, the ‘Gajar’ which means the ‘Clock’ is used in both the songs.

Azhar will also focus on the love story of former Indian cricket team captain Mohammad Azharuddin and his second wife Sangeeta Bijlani and it will have Emraan Hashmi playing the cricketer.

Besides them, Azhar also stars Prachi Desai as Azhar’s first wife Noureen and Lara Dutta and Kunaal Roy Kapur in prominent roles as lawyers. The film will encompass the struggles, the success and the scandal in Azharuddin’s life. Directed by Tony D’Souza, it is slated to release on May 13th 2016

Synopsis
“Azhar” is based on a few highly talked about incidents and facts in Azhar’s life, Azharuddin, who ended up becoming the country’s most controversial sportsman yet. From setting world records that are yet to be broken, to getting embroiled in the first ever match fixing scandal the country witnessed, the film traces Azhar’s insurmountable highs and his tremendous lows.

The film begins with Azhar as a young child from a middle class home in Hyderabad who dreams of becoming a cricketer and captures his entry on sheer merit in the professional arena of Indian cricket as a teenager. Drawing parallels with his personal and professional life, we are introduced to a young and shy Azhar who’s arranged marriage with Naureen throws light on his private world that was forever closed to the media and the public glare.

His rise as the captain of Indian cricket team shows us the metamorphoses of the man who enjoys a flamboyant life style and has become accustomed to the adulation of fans and the media. At this point, Sangeeta enters the scene. Azhar’s eventual marriage with the actress changes his life forever.

Even as Azhar is set to create a record of having played 100 test matches, the biggest twist in his career comes when he is accused of being involved in the match fixing scandal. The first ever controversy of this magnitude, witnessed by the country, cuts short his career bringing him much shame and ignominy.

From being labelled a living legend, Azhar becomes an accused. How that change happens and what Azhar goes through when faced with life-damning allegations- form the crux of the story. Though the film is not a biopic, for the first time, Azhar, the film, provides us with the inner view of a much publicized life and times, of the cricketing hero who fell from grace and changed the gentleman’s game forever.