Hindu statesman Rajan Zed, in a statement in Nevada (USA) today, said that this party-anthem/club-song music-video unnecessarily dragged sacred Hindu concepts and symbols with no linkage to the lyrics/storyline.

Zed, who is President of Universal Society of Hinduism, asked:

“What was the connection of—depicting one person dressed as Lord Shiva holding a trishul and sitting on the pavement; three persons dressed as Hanumans and standing with gadas leaning against their shoulders; two saffron-clad sadhus (with one on the ground and another high on a bamboo stick holding a mala) sitting on the roadside, as if meditating, with incense burning in front of them—with the lyrics in the video like “drink from me?”

Rajan Zed pointed out that Hindus understood that the purpose of Coldplay-Beyoncé in this case apparently was not to denigrate Hinduism, but casual flirting sometimes resulted in pillaging serious spiritual doctrines and revered symbols and hurting the devotees.

Hinduism was the oldest and third largest religion of the world with about one billion adherents and a rich philosophical thought and it should not be taken frivolously. Symbols of any faith, larger or smaller, should not be mishandled, Zed stated.

Rajan Zed noted that inappropriate usage of Hindu symbols/concepts for mercantile greed or commercial/other agendas was not okay as it hurt the devotees. Moreover, it might unnecessarily perpetuate caricaturing and stereotyping of Hinduism. 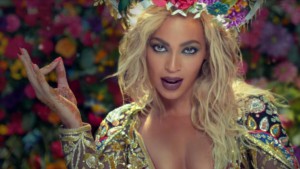 Zed further said that Hindus were for free artistic expression and speech as much as anybody else if not more. But faith was something sacred and attempts at trivializing it were disturbing for the followers.

Other Hindu symbols shown in the video included another two saffron-clad sadhus walking with trishuls and kalashs, group playing devotional music with manjeeras as if in a kirtan and diyas burning nearby, another saffron-clad sadhu lighting a diya, etc.

Recently released “Hymn For The Weekend”; of 4 minutes and 18 seconds, produced by Simpson-Stargate-DD, directed by Ben Mor; is track number three off the British rock band Coldplay album “A Head Full Of Dreams”; which has 11 tracks (plus one bonus track for Japanese edition); reports suggest.