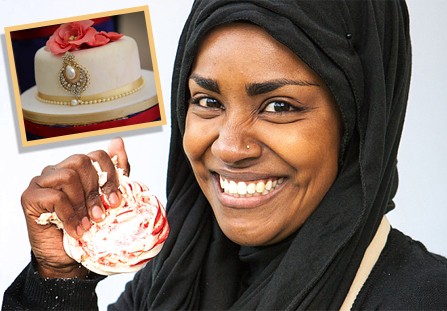 Nadiya Hussain, semi-finalist of this year’s Great British Bake Off, has been crowned the winner of the show.


Nadiya, now known as much for her facial expressions as she is for her baking talents, was tasked alongside the other two semi-finalists – Tamal Ray and Ian Cummings – to create a classic British cake with at least three tiers for the final episode’s showstopper.


Inadvertent ambassador and face of the average British Muslim and South Asian on mainstream television, Nadiya chose to bake a “big fat British wedding cake” for the final’s showstopper. Sitting on a stand decorated in red, white and blue sari material, Nadiya’s cake was adorned with jewels from her own wedding day.


The 30-year-old mother-of-three, who did not have a wedding cake due to the fact her marriage took place in Bangladesh, took the opportunity to bake a herself and her family a personal wedding cake of the lemon drizzle variety – her husband’s favourite.


She said: “At the very end of the filming I took the cake out to my family’s table and we all had a slice. So my husband and I did get our wedding cake after all.”


Of the final, she said: “Bizarrely, I found the final was one of the least scariest [rounds] and I really enjoyed the experience the most out of all the filming days.


“I felt at that stage that I could do really well or really badly, I had nothing to lose, so I went into the tent and gave it everything I could.


“The showstopper was a celebration cake, and as I never had my own wedding cake I wanted a proper iced wedding cake.”


The Luton-born baker with Bangladeshi origins became a fast favourite of individuals from the Muslim and South Asian community as well as the nation as a whole, early on in the competition.


Nadiya, Prime Minister David Cameron’s favourite candidate, earned the title of “star baker” three times in the show and is most certainly one of, if not the main, reason the final became the most-watched TV programme of the year, with an average audience count of 13.4m people tuning in to see Nadiya victory, an increase of over one million viewers from last year’s final, which saw Nancy Birtwhistle crowned winner.


Following her rise to the stardom on the small screen, Nadiya has said she is “looking forward to see what will happen” after show concludes.


However she maintains that her family life would now “carry on as normal”.


“Being a mum to three small children under 10 is pretty time consuming, but I wanted to have my own adventure, which with a very supportive husband and a belief in my own ability, I can now carry on having my adventure,” she said.


“I am really looking forward to see what will happen.”