Home Sports A Day to Remember 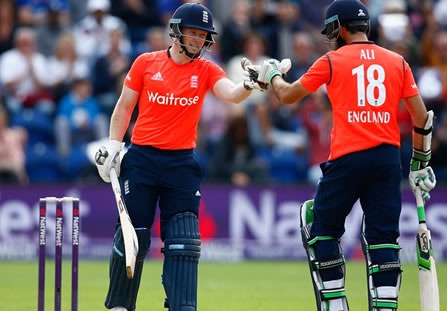 Moeen Ali admitted it had been a day to remember after his all-round contribution saw him named man-of-the-match in the five-run NatWest T20 International victory against Australia .
Moeen smashed an unbeaten 72 and took 1-3 in his only over, picking up the key wicket of Glenn Maxwell and ending a 112-run stand with Steven Smith.
Earlier the Worcestershire all-rounder had added 135 with Eoin Morgan as England recovered from 18 for two to post 182 for five.
Smith’s 90 looked to be putting the tourists on top, but Ben Stokes – one of four Ashes winners in England’s line-up – held his nerve in a crucial last over which saw three wickets fall, two of them run-outs.
“It’s the first time I’ve been man-of-the-match for England so it’s a great feeling,” Moeen told ecb.co.uk. “Winning and contributing with the bat and ball was great.
“We just concentrated on doing the basic things right – play the simple shot if we could – and thankfully today it was a very important partnership [with Morgan].”
England had lost both their openers in an express over from Pat Cummins, who touched 95 mile per hour, but Moeen insisted he wasn’t fazed by such blistering pace.
“I was just thinking to play properly and play proper cricket shots as much as I can,” he added. “I didn’t take the situation of the game into consideration too much; I was going to play properly and thankfully today it came off.”
Moeen’s wicket came with his first ball and again the all-action Stokes was involved – making up considerable ground from long-on before clinging on to a spectacular diving effort.
Although the bowler was keen to take some of the credit for his field placement, saying: “It was a brilliant catch – I swapped him with Alex Hales because obviously Stokesy is really quick and he’s got a great arm so it was a great catch and changed the game.
“It’s a good confidence booster – obviously Australia are a really good side and to beat them in the short format that they are very good at it is good for the lads, so hopefully we can keep the momentum and take it in to the one-dayers.”