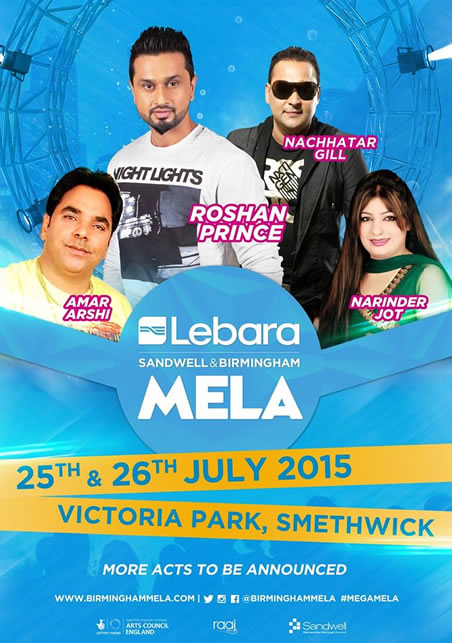 The popular Sandwell & Birmingham Mela is back for 2015 – and will be held on the weekend of Saturday 25 and Sunday 26 July in Victoria Park, Smethwick.
After the huge success of last year’s Mela, which attracted more than 120,000 people, big plans are under way as the two-day festival celebrates its fifth year.
Following a successful partnership in 2014, Lebara has committed to support the event for a second year, this time as title sponsor.


The Lebara Sandwell & Birmingham Mela has become one of the largest cultural celebrations in the UK, showcasing South Asian culture and talent on an international stage.

The festival promises to be a weekend extravaganza combining music, dance, sport, food, shows and a funfair. With a mix of international artists, community arts and cultural groups, the event will be a celebration of culture over nine different ‘zones’, including a massive Mela carnival.

“Set in the heart of the community, this event has something for everyone. So get the weekend of 25 and 26 July 2015 in your diary now.”


Sandwell Council leader Councillor Darren Cooper said, “The Mela is always a real highlight of the calendar, bringing together community events and international stars and open to everyone with a feast of entertainment, food and activities.

“It draws people from all over the country and this fifth annual Mela promises to be a fantastic spectacle in the heart of Smethwick.”


Yoganathan Ratheesan, chairman and CEO of Lebara, added, “At Lebara we are passionate about embracing culture and diversity.

“The spirit of Mela is all about bringing families and communities together to celebrate the richness of South Asian culture, so we are delighted to continue our partnership, and we’re looking forward to an even more spectacular event this year.”