The son of a Labour councillor is facing deportation from Turkey after allegedly trying to enter Syria illegally from the country.

Waheed Ahmed, 22, was seized near the Syria border on April 1 alongside eight other Britons, of whom four were adults and four were children. 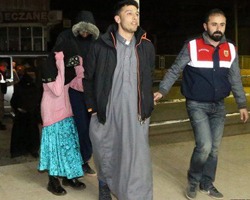 His father, Rochdale Labour councillor Shakil Ahmed, had been led to believe his son was on holiday and said he “wanted his son to come home as soon as possible”.

He said in a statement: “My son is a good Muslim and his loyalties belong to Britain, so I don’t understand what he’s doing there.

“If I thought for a second that he was in danger of being radicalised, I would have reported him to the authorities.

“He’s studying a degree in politics and sociology at Manchester University and has a good future ahead of him.”

Assistant Chief Constable Ian Wiggett has that the “safety and welfare” of the children is the primary concern, as is the need to ensure that a “full safeguarding strategy” is in place upon their return to Britain.

Police have said that all nine individuals seized in Turkey would be returned to the UK “in due course”.