“When I laid Ayesha in her grave I didn’t want to come out.”

The heartbreaking diary entries of an eight-year-old girl have been published following the conviction of her murderers. Ayesha Ali’s writing showed the true extent of mental and physical torture that she was put through by her mother and her lover.
“I will change…being thought bad, naughty and mean it’s getting to be very upsetting.” She wrote.  “I don’t like hurting other people’s feelings! I don’t know how I make myself do these things! I hate getting punishments so I’m gonna make sure I can change.”
Polly Chowdhury, 35 and Kiki Muddar, 43 both of Bedwell Court, Broomfield Road, Romford, were found guilty of killing the eight-year-old at the home they all shared on the night of 28 August 2013.
The court heard how Chowdhury, Ayesha’s mother, and Muddar subjected the girl to sustained abuse, both physical and mental, in the months leading up to her death.
Muddar – who had worked her way into Chowdhury’s affections – orchestrated a fictitious environment in their home, inventing two characters which she used to manipulate her and Chowdhury’s relationship with Ayesha.
The characters, a man called Jimmy Chowdhry, who Muddar created via Facebook, and ‘Skyman’, portrayed as a guiding spirit who conversed with Polly Chowdhury via text message only, were used to influence their behaviour towards Ayesha.
Muddar and Chowdhury first met in 2007 when Chodwhury and her family moved into a property at The Coppins, Chadwell Heath – Muddar lived in a neighbouring property to her. The pair struck up a friendship which quickly grew in intensity.
Throughout this period, Muddar invented stories to fuel this intensity and illicit sympathy from Chowdhury including that she was suffering from cancer and also that her boyfriend had died during the London riots.
As Muddar and Chowdhury’s relationship developed, the marriage between Chowdhury and her husband deteriorated.
In 2011 the family moved to an address in Lodge Avenue, Dagenham and Muddar followed. In December 2012, Chowdhury left her husband and moved into Bedwell Court, Chadwell Heath. Muddar moved in with her February 2013.
With Chowdhury’s husband now out of the picture, Muddar began to develop her fictitious characters in order to gain more influence within the household.
Through the character of Jimmy Chowdhry, Muddar instigated a fabricated online relationship with Polly Chowdhury, drawing her in to the point where she wanted to marry him. Muddar would convince Polly Chowdhury that Ayesha’s cold demeanour towards her would impact on her and Jimmy Chowdhry’s health while ‘Skyman’ would send messages telling Polly Chowdhury to punish her daughter for acts deemed as bad behaviour. These messages were further supported by messages from ‘Jimmy Chowdhry’ and directly from Muddar.
This pattern appeared to escalate in the months leading up to Ayesha’s death with the child being forced to do menial tasks such as scrubbing the house, being forced to miss meals, take cold baths and to spend hours shut in her room as punishment for perceived bad behaviour. 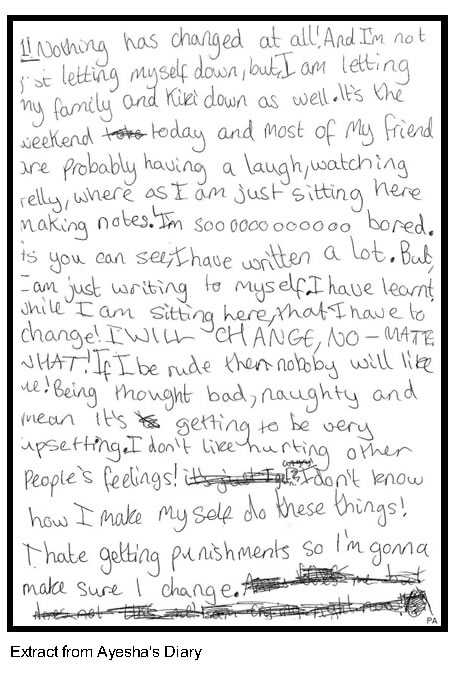 It is not clear when the physical abuse of Ayesha started but on the morning of 28 August 2013 Muddar left the house in Bedwell Court and sent a text to Chowdhury which stated: ‘Has something happened? My hearts going mental?’ On returning to the property later that day, Muddar appeared to have purchased a new shower hose – the inference being that the existing shower hose within the house had been used to assault Ayesha so a replacement was required.
Muddar stayed at the address until just after 21:00hrs when she left again. At around 11:00hrs the following day, Muddar returned to the address and just after 11:30hrs she called 999 to state that Chowdhury had cut her wrists.
On arrival, London Ambulance Service found Ayesha’s lifeless body on her bedroom floor – it was obvious that she had been dead for some time.
A post-mortem examination subsequently revealed Ayesha had 56 separate injuries to her body including a bite mark on her shoulder and fresh bruising on her head, body and limbs.
When paramedics spoke to Muddar at the scene she showed no concern for Ayesha, stating: ‘Ayesha is always naughty.’ She then added: ‘She was a naughty child and Mum thought she was possessed by the Devil.’
Chowdhury was taken to hospital for treatment and within the flat a number of letters and notes were found. One claimed she had taken Ayesha’s life after her daughter had tried to drown herself in the bath.
Muddar was initially treated as a significant witness but once police began to analyse the phone and computer accounts of all involved, it became clear she had played a full and active part in the abuse of Ayesha.
As part of the investigation, detectives recovered and analyzed 140,000 lines of text from messaging apps and emails, 40,000 messages from a laptop, 1,450 voice recordings which were backed up on Kiki Muddar’s phone and 17,000 pages of Facebook messages.
Both women were subsequently arrested and charged with Ayesha’s murder and with causing or allowing serious harm to a child.
Detective Inspector Donna Convery from the Homicide and Major Crime Command said, “In all my years as a police officer I have never come across a case of this nature. It took us months to unpick and investigate the web of lies that Kiki Muddar had constructed. Through the use of specialist officers we were able to evidence beyond doubt the roles that both these women played in emotionally and physically abusing Ayesha.
“Ayesha was a bright and intelligent little girl who was well liked by teachers and classmates alike. In the six months before her death Ayesha was subjected to horrific levels of mental abuse, which during the summer holidays escalated to become physical. She was an innocent child who was caught up in the most bizarre set of events, manipulated by two adults who were intent on causing her harm.
“Ayesha shold have been protected by the one woman she thought she could trust but her mother, Polly Chowdhury, allowed herself to be influenced by Muddar so that sustained mental and finally physical abuse could be inflicted on her daughter.
“Muddar went to extremely sophisticated and complex lengths to construct a number of fictitious characters, through whom she exercised her influence on Chowdhury to harm her child.
“What the motivation behind this campaign of abuse was remains unclear. What is painfully clear, however, is that Ayesha, an eight-year-old girl, has had her life taken away in horribly brutal circumstances.”
In a statement from Afsar Ali, the father of Ayesha Ali, he said when he laid Ayesha in her grave he didn’t want to come out.
“This has been the hardest and most difficult thing that I have ever had to do in my life. It is impossible for me to sum up what has happened in the last couple of years. It is impossible to find the words to describe my feelings.
“On Thursday, 29 August 2013 our world fell apart. Everything that had happened over the past few years collapsed in a blink of an eye. Our world crumbled right in front of us.
“In our beautiful religion of Islam we are taught the door of heaven lies beneath the feet of your mother. We are taught that daughters are the source of immeasurable joy for their parents. Long before a daughter is born, she is deeply loved.
“Daughters are often a mother’s best friend, her ally and her most precious treasure. For a father, a daughter is often the heart of his soul, his princess. It is no surprise therefore that a parent’s love for a daughter is so intense and selfless. My love for my princess was just that, intense and selfless.
“The two people that Ayesha trusted and loved were the very people that took away her life. When my princess died, a part of our lives did too. We never knew how hard it was to loose someone you love.
“In my heart our princess Ayesha shall forever remain.”