Your Country Needs You

The British Army is making a historical plea to British Muslims to enlist in the country’s armed forces saying more needs to be done to attract minority communities. According to the Head of the British Army, Sir Nicholas Carter, the military should be “drawing talent from all of the society we represent” enabling it to find the best recruits.

“Our recruitment from the black, Asian and minority ethnic communities has been improving over the years, but it is nowhere near where it needs to be. We have to do more.”

“The values and standards we espouse resonate closely with these communities and there is much common ground that we can build on to broaden our recruitment base.”

At present, soldiers from the black, Asian and minority ethnic groups make up just over 10% of the Army’s 87,000 regular personnel, less than the proportion in the wider population, a haunting fact which Birmingham MP Khalid Mahmood pointed out when he stated “more than twice as many Muslims have gone to fight for Islamist groups in Syria than are serving in the Army.”

Additionally, not all of those who are Muslims in the Army are British – some joined from Commonwealth countries.

Islamic religious advisor to the Ministry of Defence, Imam Asim Hafiz OBE said that the values of the Army rightly match those of Islam. “Loving your country and serving your community is an important part of the Muslim faith. 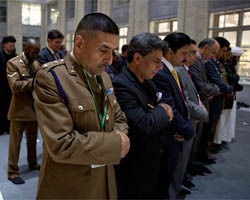 “Some people have questioned whether you can be a good Muslim and serve in our armed forces because of the wars in Iraq and Afghanistan. But the young men I’ve served alongside in Afghanistan know that they’re trying to make the country safer for the people who live there.

“Some of these soldiers are very devout but they don’t feel a contradiction between being a Muslim and serving their country. We need to get out there and make that argument much more clearly.”

Muslim’s have long fought in wars, supporting British troops. Over 400,000 made-up the estimated 1.3 million which fought during the Great War, a fact many British-Muslims fail to know. A poll carried out last year by thinktank British Future, found that only 2% of the population knew about Muslim soldiers fighting and dying alongside British armed forces during the two World Wars.

“If we are going to deploy in the future into northern Iraq again, or in Syria, we need people that can speak not only to local civilian populations we wish to influence, but also to our partners and our allies. Having that proficiency in the language is very very important.”

“I’m very proud to be able to launch the country’s first Armed Forces Muslim Forum. This is a real milestone, which underlines the strong relationship that exists between our armed forces and the Muslim community, and shows our commitment to strengthening it.”

President of the Islamic Society of Britain, Sughra Ahmed, acknowledged the pride and patriotism Muslims felt for their country. “British Muslims are proud to play an active part in our society and the recent centenary of the First World War was a chance to show how this shared history stretches back over a hundred years and continues today.”

The Ministry of Defence is also set to launch a Muslim Peace Garden in remembrance of Muslims killed in the armed forces.