Palmira Silva, 82, was killed in random but frantic attack by a 25-year-old man

A woman was beheaded in her home in Edmonton in an indiscriminate attack by a ‘crazed’ man wielding a machete.
Palmira Silva, an 82-year-old widow and grandmother, was in her north London suburban garden when she was decapitated by the 25-year-old in the random but frantic attack.
Ms Silver, who was pronounced dead on the scene, was described as being “a sweet lady” by one neighbour, led an active life and was seen working every day at Silva’s Café, a café in Edmonton Green run by her family.
The perpetrator, believed to be a local man, was seen by residents brandishing the foot-long blade which he had used to attack a passing vehicle and a cat before he began roaming back gardens in the area in search of a victim.
Armed police subdued the attacker who was distracted by officers to prevent further attacks. He was cornered and taken down through use of a Taser stun gun before being arrested, an incident which left some officers injured.

A neighbour of the victim, who wished to remain anonymous, described the suspect as having wielded a machete whilst shouting about cats. The witness also saw a headless cat as he watched the perpetrator from his window.

He said, “There was a scream so I went to the windows and saw a guy with a machete with blood dripping from it.

“He was standing in the garden and walking up and down shouting about cats.”

Police believe that the suspect had attempted to attack a further two residents at another home in the street, but the individuals had escaped without injury. 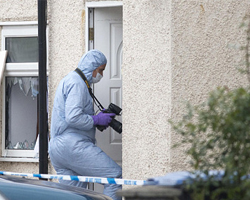 Witnesses who described the police’s desperate response to the incident said that officers used battering rams to break down front doors and smashed the windows of several properties. They attempted to help residents to safety and had carried terrified children away from the scene.

Neighbour Freda Odame, a 30-year-old catering worker, said she heard what sounded like chaos outside and, upon pulling back her curtain, saw a mid-twenties man with a long-bladed knife outside.

“Someone was shouting and the door was banging. I could hear the screaming but I could not hear what he was saying,” she said.

“I could see that he had a big curved knife, about the size of an arm’s length and he was crouching as if frantically searching for something. He had a crazed look in his eyes so I closed my curtains because I was scared.” 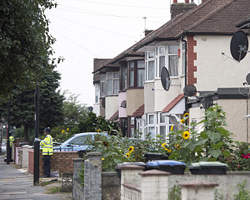 Another neighbour, George Stylianou, said, “Policewomen were sprinting past and screaming at us, ‘Get back – you don’t understand how dangerous this man is’.”

Witness Ricardo Kwiek, a 23-year-old taxi driver, saw officers storm into a property, bringing out a young man who was fighting the police before being forced into a van.

“There were policemen trying the front door and the back. The chap inside wasn’t letting them in,” he said. “They got in the back door. They came out with a man who was struggling and fighting. He wasn’t giving up. I could see loads of police fighting with him.”

Commander Simon Letchford, of the Metropolitan Police, had commended the bravery of the officers, saying they “put themselves in extreme danger to protect the public”.

Though some residents have claimed that the suspect had converted to Islam last year, the claims remain unverified and detectives don’t think the attack is connected to terrorism.

Detective Chief Inspector John Sandlin, leading the investigation, said: “We are confident that we are not looking for anyone else at this stage.

“Whilst it is too early to speculate on what the motive behind this attack was I am confident, based on the information currently available to me, that it is not terrorist related.”

MP of Edmonton, Andy Love, added, “I am absolutely horrified and stunned by what has happened in my constituency. This is a relatively solid community with relatively good relations between all of the people.”

The suspect is currently in hospital facing treatment of the minor injuries he suffered during his arrest.