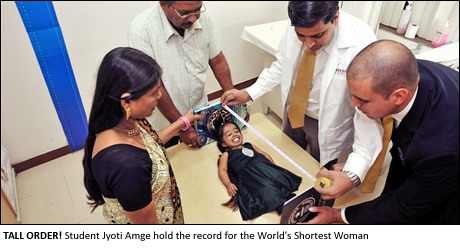 INDIAN student Jyoti Amge is on cloud nine – after being officially declared the world’s shortest woman!
The 18-year-old from Nagpur, India measures just 62.8 cm tall – 6.2 cm shorter than 22-year old American Bridgette Jordan who stands at 69cm (2 ft 3 in) and had held the Shortest woman title since September 2011.
Jyoti, who celebrated her 18th birthday last month, could only be assessed for the Shortest woman title once she had reached her adult birthday.
And to give her a birthday treat to remember officials from Guinness World Records travelled from London to her hometown of Nagpur to complete the official measurements required to verify the Shortest living woman title.
In accordance with Guinness World Records guidelines Jyoti was measured three times in 24 hours by a medical professional and her height confirmed to be 62.8 cm tall.
Jyoti has been a Guinness World Records title holder since September 2009 when she was named the world’s Shortest teenager measuring just 61.95 cm (2 ft). Since then Jyoti has grown just 0.85 cm and due to a form of dwarfism called achondroplasia she will not grow any further.
Although she is no taller than the average two-year-old child, Jyoti is a budding fashionista and with the help of her sister customises her clothes and jewellery to match her tiny size. The Amge family is committed to ensuring Jyoti lives a normal life and follows her dreams to become a Bollywood film star. Jyoti has attended regular school since she was 4 and, other than a small desk and chair, she is like any other pupil.
Despite her tiny stature, Jyoti Amge is not the Shortest woman in history. This title continues to be held by Pauline Musters (Netherlands, 1876-1895) who measured just 61cm (24in).
Speaking about her new Guinness World Records title, Jyoti said: “It is wonderful to celebrate my 18th birthday with a new world record, it’s like an added birthday present. I feel grateful to be this size, after all if I weren’t small and had not achieved these world records I might never have been able to visit Japan and Europe, and many other wonderful countries.”
Guinness World Records Adjudicator, Rob Molloy, said: “I’m honoured to be here in Jyoti’s home town to celebrate this very important birthday with her and her family. I’m pleased to be updating Jyoti’s record status from Shortest teenager and crowning her the world’s Shortest woman. Jyoti encourages us all to look beyond mere size and to just celebrate our differences.”