Zeenat Moosa talks to the author about his debut novel ‘Visa’ 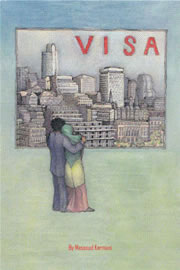 Massoud Kermani’s debut novel Visa highlights the highly-charged, politically controversial and deeply emotional subject of asylum seekers entering Britain today.
The author himself left Iran as a youth, subsequently moving to the United Kingdom where he soon settled and married. He returned to Iran just before the recent elections, an event which renewed his interest in asylum seekers and politics. Much of his writing has been influenced by his own experiences in his homeland.
Zeenat Moosa speaks to the author.
For those of us who haven’t heard about you – tell us about Massoud Kermani
I left Iran before the Islamic Revolution and came to England to continue my education. I currently live in the South of England.
Tell us about your debut novel Visa, what is about?
VISA is a book about an Iranian/British translator called ‘Arash’ who works at the Courts of Appeal, and who translates for mostly Iranian Asylum Seekers who have been turned down for refugee status by the Immigration department of the home office.
How did you come up with the title?
The title VISA is in my opinion the most suitable, as when you read the book it delves into the lives of the characters and their journeys, and often dangerous situations they find themselves in, in Iran, and their struggle to reach England where there is democracy and hopefully a permanent ‘VISA’ to remain.
This is your debut novel – did you always want to be a writer?
This is my debut novel. However, when I was still living in Iran, as a young teenager, I was very much involved in writing scripts for plays, and theatre, when I was at High School.
Arash, the main character in the book fleas Iran coming to England to further his education. Would you say Arash’s character is based around you and your own experiences of leaving Iran and coming to the United Kingdom?
Arash does not flee Iran, he simply comes here to continue his education. This is the only similarity there is between Arash and myself.
Visa focuses mainly on the issue of immigration – what are your thoughts about immigration in the United Kingdom?
I think the UK immigration system is a very fair system. This is something that comes across on the book VISA. However, as is proved in the book, you must have crucial documentary evidence to back up your story. Otherwise, everyone who comes into the country can fabricate a reason for getting a permanent VISA.
What book are you reading at the moment?
At the moment I am reading ‘The King of Tarts’ by John Grisham
What would you cite as your favourite book?
My favourite book is ‘The Appeal’ by John Grisham
And the author you would most like to meet?
There are many authors I would like to meet, but probably I would most like to meet John Grisham
Any plans for a second novel?
There are plans for a second novel but at the moment I am in the very early stages of putting the book together in my mind before I actually put pen to paper.