‘A heart-rendering tale of two optimistic women, fighting for the truth’ 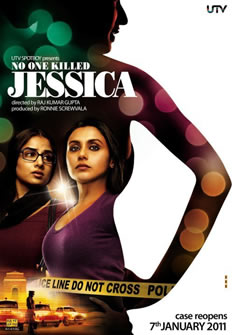 NEW Delhi, 1999. The guns at Kargil are still blazing when another one goes off, this time in the nation’s capital. Jessica [Myra], a young attractive model, trying her hand at bartending, is shot dead at a celebrity party [Kenos].
Her crime – refusing to serve a drink after closing hours. The culprit Manish [Mohammed Zeeshan Ayub], son of a prominent politician, inebriated by a deadly cocktail of alcohol and a sense of entitlement, pulls the trigger in a fit of rage.


With 300 of Delhi’s swish set present at the party, many of whom are witnesses to the murder, Manish looks all set to go to the gallows. Except that it doesn’t quite turn out that way.

Now two women, Jessica’s sister Sabrina [Vidya Balan] and the feisty TV reporter Meera [Rani Mukerji], decide to outmanoeuvre Manish and his politician-father [Shireesh Sharma] at their ploy.
Throughout the seven years [1999-2006] the case goes through several heights and uproars of legal complications. In turn witnesses become unsympathetic with the situation. Which leads to frustration amidst Lall’s family.

Thereafter Manish is acquitted, which causes a furious public spectacle and a harsh and inexorable campaign by the media, which ultimately leads to what was intended – A LIFE SENTENCE FOR MANISH.
To narrate a story of a true incidence is most definitely a mission to say the least. But one film old [directed Aamir] Rajkumar Gupta puts together a touchy and unsettled story of Jessica Lall’s murder case on celluloid effortlessly. As they say mission accomplished!
When the film was announced I couldn’t help but refer to Rajkumar Santoshi’s Halla Bol with a similar incident to have taken place at the onset of the film [shootout at a celebrity hangout]. Both films are very different and no comparisons should not be made. No One Killed Jessica is solely about the real life incident, the corrupted world of politics and politicians and the so-called power that they may demonstrate.
Rajkumar Gupta shot the film in Delhi, the characters and the locales are real and enhance the value of the film.
Coming to my favourite part – the MUSIC. You would think that such films have no room for music. But National award-winning composer Amit Trivedi who debuted with the same director in Gupta’s maiden project Aamir and lyrist Amitabh Bhattachrya proves us wrong. The album has been receiving generally positive reviews from audiences.
Cinematography by Anay Goswami has done extraordinary job with each frame.
Rajkumar Gupta, the man of many talents also scripted the film dialogues. The lingo is fitting and makes the film what it is to a large extent.
Off late Vidya Balan has received much adulation for her recent work [Paa and Ishqiya] and guess what? She’s done it again. I couldn’t have thought of any other actress pulling of the baggy tees’, huge spectacles and her hair tied in a ponytail and still look beautiful. Vidya has essayed the role of Sabrina Lall [Jessica’s sister] with so much care and sensitivity. She showed her fans she most definitely is a versatile actress and has a great knack of choosing the right work. Kudos to Vidya.
Rani Mukherjee plays the role of Meera Gaity, a bold, brave and over-confident journalist. I must recognise that Rani has a talent of mouthing abusive words and explicit language with comfort. Mukherjee has attacked the character of Meera very well. It is alleged that Rani’s role is loosely based on that of journalist Barkha Dutt.
Mohammed Zeeshan Ayub [Manish Bhardwaj] the main offender is super. Neil Bhoopalam [Vikram Jai Singh] the key witness and friend of Jessica Lall [Myra] is tremendous. His performance during the court room sequence, and when he comes for an audition for a movie is brilliant. Myra [Jessica Lall] has a great screen presence. Samara Chopra who essays the role Jessica’s friend Naina Sehgal, and is also a key witness has delivered a fantastic performance especially during the court room scene. Rajesh Sharma as N.K. the investigating police officer is admirable. Shireesh Sharma as Pramod Bhardwaj the politician-father is faultless.
A failing for me would be the extensive focus on the public reaction, although the outcry of the public was a significant part of this case, but since it is a feature film, it can seem repetitive. Hence if the film was condensed in this area it would have made a stronger impact. As famously said ‘short and sweet’.
Final words: From the commencement of the film promotions [13 November 2010] the movie-goers were fascinated and intrigued by the promotions and music. This film is a mixture of facts and fiction; but let me assure you, no way is it a docu-drama. This thriller is a journey of two strong, idealistic women fighting for justice against all odds.
This for me is an important film with a relevant message on judicial reforms.
4/5 Stars
No One Killed Jessica 12A reviewed by Supriya Davda
For further information on the film log onto http://www.noonekilledjessica.com/