Sightsavers launch £1m to restore sight to people in India 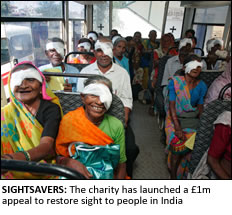 A HOST of celebrities are backing a new campaign highlighting how less that £20 can restore the sight of someone in the developing world.
British Asian actress Sunetra Sarker and film director Gurinder Chadha are just two famous faces backing the campaign by international development charity Sightsavers.
The charity works in more than 30 developing countries to prevent blindness, and restore sight.
The charity is currently running an appeal to raise £1 million to restore sight to people in India who are unable to afford treatment.
Other celebrities supporting the campaign include music producer Bally Sagoo, M&S model Twiggy and actor Martin Clunes.
Just this week a new survey launched by the charity revealed that 65 per cent of Asian people admitted their sight would be the sense they would miss the most, while 47 per cent said their sight was priceless.
When asked about their attitudes towards sight loss ahead of World Sight Day on 14 October, two thirds of Asian survey respondents said the thing they would miss the most if they were to lose their vision would be seeing their loved ones.
It was a response which was mirrored by the campaigns celeb backers Sunetra Sarker and Gurinder Chadha who both admitted they would miss their children growing up.
Among other findings about the Asian community from the Sightsavers survey was 48 per cent of people say they would be willing to forgo expensive meals out in order to pay for a sight-saving operation for someone else, whilst a quarter would be willing to cut back on shopping sprees for clothes.
Sight is viewed as priceless by many people, yet it can be very cost-effective to restore says Sightsavers.
Some 45 million people around the world are blind, 75 per cent of whom are needlessly so.
In India alone 7.5 million people are blind because of cataract, and for those living below the poverty line, accessing treatment for sight loss is harder due to a lack of medical resources and financial support.
Sightsavers, which has worked in India for almost 45 years to prevent and cure blindness, can transform the life of someone in India blinded by cataract for as little as £15. 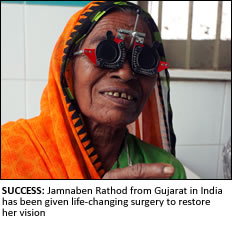 For 67-year-old Jamnaben Rathod from Gujarat in India who had been blinded by cataract, she was so excited about finally being diagnosed and given life-changing surgery to restore her vision: “I am so happy! I am looking forward to seeing my family’s faces again and getting back to work.”
Dr Caroline Harper, Sightsavers Chief Executive said: “Last year Sightsavers was able to perform over 270,000 cataract surgeries, changing the lives of people in some of the poorest and remote parts of the world like India.  This would not be possible without the generosity of the UK public.  This World Sight Day we are encouraging people to think about what they might be willing to give up to be able to help others less fortunate than themselves whilst remembering the huge impact it could have.”
For more information about Sightsavers’ World Sight Day campaign or its work in India and other parts of Asia visit www.sightsavers.org/visionindia