Mustafa Qadri speaks to those who have nothing to return to 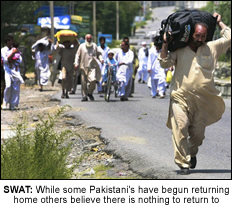 PAKISTAN is in the middle of its largest operation against the Taliban in the troubled Swat Valley and adjacent areas.

Although a small first wave of refugees has begun to return as part of the government’s efforts, up to 2.5 million people are believed to have fled the once quiet, scenic mountain ranges. At a camp in Risalpur, 50 miles south of some of the fiercest battle zones, I spoke with some of the displaced.

“We travelled by foot from Mingora to Kokkari, then we went to Sangar… some nine miles, [before taking a bus to Risalpur]”, says Mohammad Yahya, former mayor of a village near Mingora.

Entire communities, including women, children and the elderly, made the journey through high mountainous terrain. Almost all were forced to travel on foot because public transport was either too dangerous or expensive.

The displaced communities live a rudimentary life typically huddled together in cramped dwellings or tents without running water or electricity. Mountain dwellers their entire lives, they are not used to the extreme summer heat of the lower lying districts of Mardan and Risalpur, nor of Peshawar, some 55 miles south, where most have sought refuge. Diarrhoea and water borne diseases, exacerbated by the heat, are very common, particularly among the youngest.

“One night there was a series of explosions on the outskirts of the village”, says 11-year-old student Mannu, whom I met in one of the bare dwellings of Risalpur’s industrial area, donated to the displaced by local businessmen. Mannu’s entire village, around 13 families, approximately 200 people, decided to flee their homes the morning following the blasts.

But homelessness is only one of the impacts of this war. Swat is famous for its rich array of fruit and other cash crops. Because the conflict started at the height of the harvesting period last May, the largely agrarian population has lost much of its earnings for the year.

Mingora, the largest city in Swat and one of the epicentres of the clashes between the Taliban and army, was transformed into a fortress by the insurgents. It was only recaptured after devastating military bombardment that, according to locals and unofficial army sources, killed overwhelmingly more civilians than militants.

However, when asked who bears the responsibility for these crises, it appears that the displaced harbour deep resentment towards the Taliban for their role in annihilating their once peaceful neighbourhoods.

“These Taliban say they fight for the rule of Islam”, says Purmanari. “They say there is no Islam in Swat. But what, are we not Muslim?”

“The Taliban say they want shari’a (a legal system based on Islamic principles), but what kind of shari’a is this – killing and looting? It is just a game to them”, says Mannu.

Mannu dared to seek an education in a region of Swat where the Taliban openly forbade women from doing so. “I’m not afraid of going to school”, she says defiantly when asked about her studies. Risking physical harm as the Taliban destroyed over 200 schools, Mannu continued to attend one of the few schools that remained open before she eventually fled with her family.

“We are not afraid because we are doing the right thing”, says Ziauddin Yousufzai, a school teacher. “The people who are preventing our female students from getting an education, they should be afraid. Islam teaches us that getting an education is compulsory for everyone. This is the teaching of the Prophet Muhammad. I own Islam as much as it is owned by the Taliban. Why should I be dictated to by the Taliban? Islam instead motivates me to give education to my children because education is light and ignorance is darkness.”

The darkness seems to have engulfed Swat. Yet the displaced are using poetry, such as these words from Mannu, to brighten their plight:

“My sweet Swat has caught fire, not just from one side but from everywhere./ The fire has engulfed everything – our people, our customs, our schools, our markets./ My beautiful Swat, with its valleys and peaks, its perfumed flowers, all have lost their lustre./ In every direction there is war. The people, who laughed, who sang, are now silent./ The once majestic and peaceful River Swat has dried up./ I pray to you God, bring back the paradise, the peaceful Swat I remember.”
Mustafa Qadri (mustafaqadri.net) is the Middle East and South Asia correspondent for The Diplomat magazine and newmatilda.com.