Home Features I choose how I protect my modesty 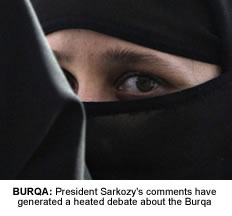 WHEN French President Nicolas Sarkozy proclaimed the Burqa was ‘not welcome in France’ the age-old debate of the Islamic veil reared its ugly head yet again.
Whether it be the Burqa, Hijab, Niqab or Jilbab, the issue of how Muslim women dress in the Western world has always sparked fierce discussions.
Mahfooz Bibi is a Birmingham mother who wears the Niqab –a head to toe gown through which only the eyes are visible.
Writing exclusively for The Asian Today she explains why she believes President Sarkozy’s comments are wrong
“The Burqa is not a religious problem; it’s a question of liberty and women’s dignity. It’s not a religious symbol, but a sign of subservience and debasement. I want to say solemnly, the Burqa is not welcome in France. In our country, we can’t accept women prisoners behind a screen, cut off from all social life, deprived of all identity. That is not our idea of freedom.”
The very words spoken by Nicolas Sarkozy. While his comments were received well by those in France, personally as a Muslim woman who chooses to cover up it shows the narrow minded and bigoted individual that he is.
For some reason how Muslim women choose to dress has sparked fierce debates.
I read one piece that suggested the Western world were somewhat afraid of the way Muslim women dress, not being able to see beneath the veil. I have to disagree with this. I think it has more to do with the West’s uncontrollable desire to ‘save us’. Perhaps they feel that we are imprisoned victims, damsels in distress, forced to cover up by controlling fathers, husband and brothers.
But in all reality it couldn’t be further from the truth. I choose to wear the Nikab to protect my own modesty. As a young girl I wore a shawl to cover my face, continuing the practice when I wed my husband. In the early 1990’s I chose, (note the word chose, not forced), to wear the Niqab.
My reasons were quite simple – it is ordained in the Qur’an that a woman must protect her modesty and personally it was the perfect way for me to protect my modesty by not drawing unwanted attention.
I have a daughter who also wears the Niqab, and it was a choice she made on her own.
Do I believe the UK will ever ban the Burqa? I would like to say ‘no’, but as the saying goes ‘never say never’. If the UK did adopt such a policy, I would fight tooth and nail against it. Wearing the Niqab is MY choice and it is my fundamental human right to be allowed to wear what I deem suitable.
In a society where women are accepted for wearing next to nothing, don’t chastise me for covering up.”
By Mahfooz Bibi