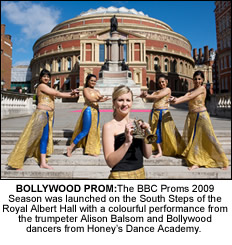 THE iconic BBC Proms will celebrate Bollywood for the first time in its history later this year.
The series of classical concerts will open on 17 July at the Royal Albert Hall and will feature a day of Indian music.
Indian music star and talent show host Shaan will be the master of ceremonies for the August 16 event at the Royal Albert Hall which will culminate in a Bollywood climax.
Yesterday the BBC launched this year’s proms with trumpeter Alison Balsom and members of Honey’s Dance Academy.
“There are plenty of opportunities for audiences to join in music and dancing in workshops in Kensington Gardens and hear free performances of folk musicians from Rajasthan, Gujarat and Kerala,” a BBC spokesperson said.
For more information log onto www.bbc.co.uk/proms/2009