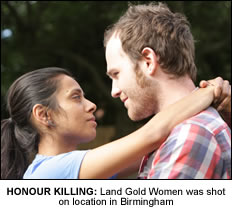 THE UK’s first film on honour killings has received support ahead of its Birmingham premiere this month.
Shot entirely on location in Birmingham, ‘Land Gold Women’ follows the story of a British-Asian family caught between Eastern tradition and Western culture.
The film, which will premiere at Birmingham’s Cineworld on 12 February, has gained the support of many leaders, including the Director of the Crown Prosecution Service, Nazir Afzal OBE.
He described the film as an “astonishing piece of film-making” which left him “touched and shocked”.
He added: “[The film] brings home to everyone the tragic but terrible crimes that some families and communities inflict on their own flesh and blood. In this day and age, there is no place for the control asserted by men on women in their families and beyond. It is a matter of basic human rights – to choose who you want to marry, if to marry, when to marry, or to get out of a marriage you don’t want to be part of. The Government upholds those rights, so must our citizens. Land, Hope and Women left me touched and shocked, it reaffirmed my commitment to stop this behaviour. I left the cinema saddened but stronger in my determination to prevent harm.”

In addition, Jacqui Smith MP has also shown her support for the film:
“The Government has been working hard across departments and in partnership with many agencies and organisations such as Ashram to ensure we address these important issues both sensitively and effectively. I welcome the very valuable contribution this powerful and compelling film makes in raising awareness of this important issue.”
‘Land Gold Women’ is expected to be released nationwide in the spring.
Related Articles:
‘Honour killing’ film to premiere in Birmingham