Manish Gajjar previews the year ahead

2008 has been a dreadful year for Bollywood seeing no significant box office gains except for the historic epic Jodhaa Akbar, Abbas-Mustaan’s suspense thriller, Race and comedy Singh Is Kinng reaching the 1 million mark.
Such shortcomings have not deterred the Bollywood industry ready with big titles to lure audiences back into multiplexes in the New Year.
2009 will be a year of reckoning for Indian film industry as Hollywood studios enter the foray of Hindi filmmaking.
This will add extra pressure on existing production companies in Mumbai to go that extra mile in order to match Hollywood standards.
So expect deviation from run of the mill family dramas as cinemagoers receive more choice in genres like horror, thrillers, action, comedies and suspense dramas. 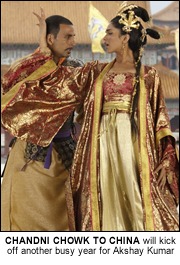 Warner Bros Pictures’ first ever Bollywood Kung Fu comedy, Chandni Chowk To China kicks starts 2009 with a bang.
Starring Singh Is Kinng superstar Akshay Kumar and Deepika Padukone, the screenplay focuses on the escapades of an Indian cook mistaken for a past Chinese war hero.
Akshay will also be starring in romantic comedy Kambakkth Ishq, about an Indian stuntman taking Hollywood by storm but is unable to find true love. He will be seen alongside Kareena Kapoor, Arnold Schwarzenegger, Sylvester Stallone and Beyonce Knowles.
Herman Baweja of the lacklustre Love Story 2050 fame will star in a cricket-based movie, Victory, with many cricket personalities playing themselves. Amrita Rao plays the female lead whilst Herman’s girlfriend Priyanka Chopra makes a special appearance.
Crowd puller, Salman Khan’s release God Tussi Great Ho did not impress audiences. But he comes back as a mafia henchman willing to kill anyone, anywhere for a tidy sum in Bonny Kapoor’s Wanted Dead Or Alive starring alongside Ayesha Takia who plays his love interest.
Salman will also appear in Vipul Shah’s London Dreams, a story based on a rock band alongside Ajay Devgan whilst Veer sees him as an Indian gladiator fighting the British Raj. 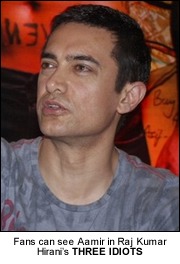 Perfectionist Aamir Khan still revelling in the success of Taare Zameen Par and Ghajini is seen in the most eagerly awaited project, Three Idiots directed by Raj Kumar Hirani of the Munnabhai series and Eklavya The Royal Guard (2007) fame.
Three Idiots is a comedy drama depicting the adventures of three students starring Kareena Kapoor, R. Madhavan and Sharman Joshi.
Shahid Kapoor of the Jab We Met (2007) fame appears in Paathshala, taking a peep at the Indian education system with versatile actor Nana Patekar and Ayesha Takia, also sharing equal screen space. Paathshala is a comedy drama with an underlying message of social relevance.
Sanjay Leela Bhansali’s Saawariya (2007) did not give Ranbir Kapoor a prominent debut. But this lad showed great acting potential in Yash Raj’s Bachna Ae Haseeno.
Whilst Katrina Kaif’s performance was appreciated in Singh Is Kinng and Yuvraaj, she now pairs up with dashing debonair Ranbir in director Raj Kumar Santoshi’s Ajab Prem Ki Ghazab Kahani, a love story with humorous moments.
Known for defying all Bollywood norms, the Bhatt brothers are back with a vengeance in 2009 with two releases. Their scariest Bollywood horror flick, Raaz The Mystery Continues sees a leaned Emraan Hashmi playing an artist who sees the future of a model (Kangna Ranaut).
Meanwhile Adhyayan Suman, Anjana Sukhani and Shahana Goswami of Rock On fame star in Bhatt’s Jashn . This musical tells the story of an aspiring rock star (Adhyayan).
Tabu’s grand comeback alongside Amitabh Bachchan in the spicy romantic comedy Cheeni Kum (2007) received raved reviews from critics. She once again graces the silver screen in Toh Baat Pakki where she plays the elder sister of newcomer Uvika Chaudhary.
After giving smash hits like Masti and Dhamaal, Indra Kumar is back with an all out comic flick, Daddy Cool consisting of a star studded cast including a soundtrack from Boney M. 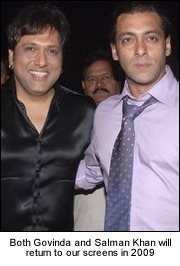 2009 would not be complete without Govinda making an appearance in Ravi Chopra’s court room drama Banda Yeh Bindass Hai alongside Tabu and Lara Dutta. Inspired by Hollywood movie, My Cousin Vinny (1992), Govinda plays a lawyer with a purpose.
But on a comic note, Govinda joins forces with director Dhawan in the lavishly produced comedy flick, Do Knot Disturb with Riteish Deshmukh, Lara Datta and Sushmita Sen adding glamour and humorous moments.
Mukta Arts’ Yuvvraaj received a lukewarm response by audiences but their next production Paying Guests may fare better. It is a comedy of errors starring Shreyas Talpade, Neha Dhupia, Vatsal Sheth, Riya Sen, Ashish Chaudhary and Celina Jaitley. Chaos and confusion results when a couple rents out a room with a condition that it is meant only for a married couple.
Mukta’s other comic flick Hello Darling is certainly bringing the house down as three stunning working girls – Gul Panag, Eesha Koppika and Celina Jaitley – teach their roving-eye boss a lesson he will never forget!
Other movies to look out for include Shoebite and animation film, Aladdin starring Amitabh Bachchan. Irrfan Khan will be seen in Acid Factory, Hisss and in Shah Rukh Khan’s production, Billu Barber.
With great movies releasing, 2009 is certainly a year to watch out for on the silver screen!
Manish Gajjar is one of UK’s leading Bollywood authorities working as a BBC Bollywood Correspondent based at BBC Shropshire and as Hindi film adviser for VUE cinemas in the UK.