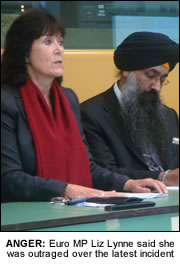 A NUMBER of Sikh delegates who travelled to Brussels for the launch of the All-Party Sikh Interest Group were denied entry into the European Parliament for a third successive time because they were wearing Kirpan daggers.
The group travelled to the city along with Euro MP Liz Lynne for the launch of the All-Party Sikh Interest Group in the European Parliament.
Ms Lynne, whose initiative it was to launch the new interest group, and who is now one of the Co- Chairs, said that they had hoped to hold their first meeting in one of the Parliaments main rooms, but that the Parliamentary Authorities had ruled the Kirpan dagger to be a security threat and denied the Sikh members entry.
This is the third time that leading Sikhs have been denied entry to the Parliament because of the Kirpan.
Speaking today Liz Lynne, who is also a member of the European Parliament’s Sub- Committee on Human Rights and has campaigned on a variety of Sikh issues, said that it was outrageous that the European Parliament was discriminating against the Sikh community in this way.
“This new Parliamentary group is intended to look in particular at how Sikhs are treated within Europe. Unfortunately it would seem that we do not have to go very far to find examples of the discrimination that many Sikh’s face everyday,” she said.
“I am deeply disappointed that the European Parliamentary authorities refuse to recognise the right of Sikh people to wear the Kirpan. The Kirpan is not a weapon, it is a religious symbol. This is not a question of security but one of religious freedom.”
“In the UK the right to wear the Kirpan is enshrined in law. This includes allowing Sikh’s wearing the Kirpan to enter the Palace of Westminster. Therefore I do not see why the rules should be different in the European Parliament.
“I very much hope that now we have this all party interest group on Sikh issues that a number of problems facing this community across the EU can be addressed”