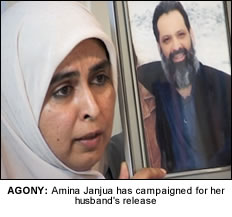 AMINA Janjua hasn’t seen her husband for three years.
In July 2005 Masood Janjua, 45, a businessman from Rawalpindi, and his friend Faisal Faraz, 25, an engineer from Lahore were travelling on bus when they were apprehended by Pakistani security forces. The government has denied holding them – but Amina has spent the last three years proving them wrong.
Masood and Faisal are just two in a number of unaccounted men across Pakistan. They have become the “disappeared” men in Pakistan’s ‘war on terror’ – held without trial and whose existence is being continually denied by Pakistan authorities.
Last month Amnesty International called on the new government of Pakistan to either release these men or transfer them to official places of detention.
Publishing a new 50-page report outlining the cases of numerous people subjected to enforced disappearance – in one case a man has been held for nearly seven years, in another a nine-year-old boy was held – Amnesty also called for Pakistan’s judges to be reinstated.
In a major national crisis in November 2007, most of Pakistan’s key judges were removed from office, including several who had pressured the government and intelligence agencies to reveal the fate of Pakistan’s “disappeared”.
Amnesty’s report uses information from court proceedings and affidavits of victims and witnesses of enforced disappearance to reveal a pattern of security or other forces arbitrarily detaining people, blindfolding them, and moving them around numerous detention centres so they become almost impossible to trace.
Pakistan’s government, the report says, has been “denying the undeniable” on this issue. Last year President Musharraf dismissed as “nonsense” claims that prisoners are held by security forces, saying that 700 were originally held but later released and that missing people “are in the control of militant organisations” or “jihadi groups”.
However, Amnesty’s report backs relatives groups’ claims that at least 563 people remain unaccounted and with a new government in office Amnesty is calling for fresh action on the issue.
Amnesty International Asia Pacific Director Sam Zarifi said:
“Prime Minister Yusuf Raza Gilani has emphasised the coalition government’s commitment to upholding human rights. We urge him to act immediately to resolve all cases of enforced disappearance.
“We don’t know if those subjected to enforced disappearances are guilty or innocent, but it is their fundamental right to be charged and tried properly in a court of law.
“As a first immediate measure, the new government should ease the suffering of the relatives of the ‘disappeared’ by either releasing the detainees or transferring them to official places of detention.”
For Amina Janjua the fight goes on.
While security forces have denied holding her husband, Amina has presented the Supreme Court with an affidavit from five people declaring that her husband has in fact been held at various places of detention – including an army building called “501 Workshop” in Rawalpindi – by the Inter Services Intelligence (ISI) agency.
One of those who has stated seeing Janjua in ISI custody is Dr Imran Munir, himself held by the same intelligence agency and allegedly ill-treated and threatened with being handed over to “US custody at Guantánamo Bay.”
Dr Munir’s case has been one of those at the centre of the legal and political battle between Pakistan’s Supreme Court judges and the government. In court proceedings in autumn 2007, Pakistan’s Chief Justice repeatedly demanded information about his case and Masood Janjua is calling on the government to “regularise the custody of the missing persons” and threatening legal action against the heads of the security and intelligence services.
Judicial efforts to bring Munir and Janjua out of enforced disappearance were however cut short by the removal of judges in late 2007 and Munir, a Malaysian citizen of Pakistani origin, has reportedly been sentenced to eight years’ imprisonment for “spying”.
In a hand-written note made available to Amnesty, Munir has described being held by the ISI in solitary confinement cells, of being deprived of sleep, being fed food with a “tremendous amount of red chillis” until his stomach bled, and being made to “stand almost 15 hours a day in chains on both hands and both feet”.
Amnesty understands that Dr Munir, whose health has deteriorated, is presently confined to a hospital.