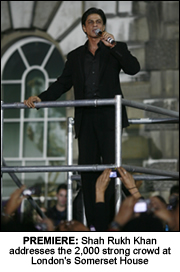 LONDON’S Somerset House was turned into a hockey haven last night as it hosted the world premiere of new Bollywood film ‘Chak De India’.
Crowds flocked to the premiere to catch a glimpse of the films main star Shah Rukh Khan who attended the screening alongside a host of Asian celebrities.
He chatted to the crowd, posed for photographs and signed autographs before introducing the film to the 2,000 sell-out audience at the open-air setting of Somerset House.
Produced by Aditya Chopra and directed by Shimit Amin, Chak De India is the comeback story of an ageing hockey player, played by Khan.
The film sees the Bollywood superstar play a hockey coach fighting his personal demons as he takes a motley group of girls to the pinnacle of world hockey.
Earlier in the day Khan, who is a keen sportsman, took his seat in the commentator’s box at the Oval as he watched India take on England in the second Test.
He said he was “excited” about his latest offering.
“I am excited about Chak De India. I don’t know whether it will do well but I am excited”, he said.
“This is a film about sports. There had been films on sports like Lagaan and others. I always wanted to do a film on sports, particularly on field and women hockey, much neglected in cinema.

“I play the coach in the film. I have 16 girls around me playing hockey. It has no songs but only sporting capabilities. The film has no romance and no villain.”
The premiere of ‘Chak De India’ is one of the glittering highlights of India Now, a three-month season celebrating London’s growing relationship with India and exploration of India’s culture and contribution to London life.
London Mayor Ken Livingstone said he was delighted the film chose to be part of the city’s celebrations.
He said: “We have many wonderful events taking place across London throughout the three month duration of India Now and the world premiere of Chak De India will undoubtedly be one of the biggest and most exciting. It is a great honour for London to host this launch event for a film, which, like so many Bollywood blockbusters, will touch the hearts and minds of millions across the world.”
Picture Gallery