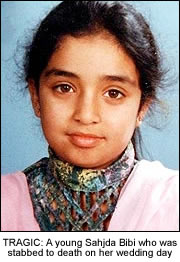 A MAN who stabbed his Muslim cousin to death on her wedding day will spend at least 16 years behind bars after a High Court judge set his minimum term.
Rafaqat Hussain, from Old Point Close, Camberley, Surrey, was sentenced to life at Birmingham Crown Court in 2003 for the brutal murder of his 21-year-old cousin Sahjda Bibi just hours before she was due to wed.
He was found guilty alongside cousin Tafarak Hussain, of Mead Crescent, Bordesley Green, Birmingham, who helped him escape moments after the killing.
Both Rafaqat, who pleaded guilty, and Tafarak who was convicted by a jury, were told by Mr Justice Collins they would spend 16 and 13 years respectively in jail under new rules for the “cruel and ferocious killing”, the Birmingham Mail has reported.
Mr Justice Collins said: “It was, as the judge said, a cruel and ferocious killing in cold blood to prevent a young woman marrying someone she wished to marry because the wider family disapproved.”
Rafaqat stabbed Sahjda 22 times moments before she was due to wed divorcee Zaffar Mughal.
Although Sahjda’s parents had reluctantly agreed to the union, they knew “the wider family, including the defendants and in particular Rafaqat, who had assumed the role of head of the immediate family following his father’s death, would disapprove of the marriage”, Mr Justice Collins said.
He also rejected claims from Rafaqat that the two men should bear the same responsibility for the murder.
Mr Justice Collins said: “Nothing in the representations I have read persuades me that the judge was wrong to regard Rafaqat as having played the leading role in the murder.”
But Tafarak “clearly played an important role”.
Mr Justice Collins added that Tafarak knew what Rafaqat was intending to do when he arrived at Sahjda’s Alum Rock house.
Speaking about Tafarak he said: “His role in assisting Rafaqat was an essential one if the murder was to be successfully carried out and Rafaqat to escape arrest”.
In setting the duo’s terms Mr Justice Collins said: “I have concluded that the minimum term for Rafaqat should be set at 16 years and for Tafarak at 13 years.
“In the case of each, the time spent in custody on remand prior to sentence should be deducted. In the case of Rafaqat that is seven months and in the case of Tafarak it is nine months.”