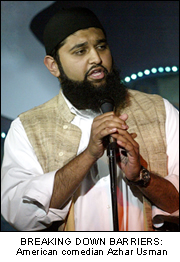 SOME OF America’s biggest Muslim comedians are set to hit the UK this spring with a host of dates lined up across the country.
Birmingham is included in the tour which will also see shows played in Leicester, Cardiff, Manchester and Bradford.
The Official Muslim Comedy Tour has international audiences and high-profile media outlets buzzing about its progressive use of comedy to bring the Muslim culture into mainstream.
The tour is designed to raise awareness, promote cross-cultural understanding and peace through humour as well as fusing humor and religion to address post 9/11 misconceptions about Muslims
The first of its kind in the UK, the All-Muslim Comedy Tour will showcase some of America’s top Muslim comics including Azhar Usman, and Preacher Moss.
“Our goal for this tour is simple,” said comedian Preacher Moss, “it is to break down racial and cultural stereotypes while educating both Muslims and non-Muslims about tolerance and acceptance through the vehicle of comedy.”
“Comedy comes from many different places and has many different messages. The messages we are sending out with the Muslim Comedy Tour is that laughter breaks all barriers no matter what peoples’ beliefs or backgrounds are,” he added.
First of the UK dates will be 7/8th April at Riverside studios in Hammersmith London. Dates for further venues are expected to be announced in the coming weeks.