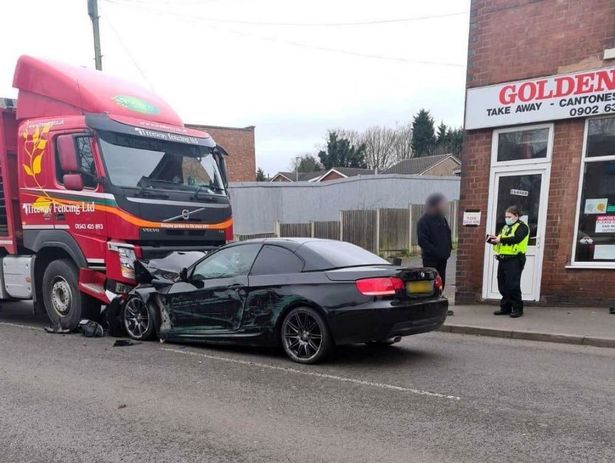 A man who was three times over the drink limit and drove into a lorry has been given 24 weeks jail time.

Jagdeep Chohan, 35, smashed his black BMW 3 Series into a Volvo lorry in a head-on collision just less than mile from his home last March.

Chohan lost control of the car, bounced off the kerb and sped before ploughing into the truck in Willenhall.

He confessed he drank alcohol before getting behind the wheel but a five-month delay in processing his blood test results meant police missed the chance to charge him with drink-driving.

Instead, admitted dangerous driving and has now been locked up.

This was the third time the addict had been before the courts for drink-driving offences.

Police were called to the Wednesfield Road crash and the crash was caught on camera by the King Cod chip shop.

Chohan was rushed to Wolverhampton’s New Cross Hospital after fears he had suffered serious injuries, with officers forced to unable to do a roadside breath test.

She said: “It was established that Chohan had not successfully negotiated a bend in the road.

“CCTV shows he mounted a footpath and travelled across the road on to the oncoming vehicles and gone straight into this Volvo lorry.

“The damage to his BMW was significant.

“The defendant was unable to be breathalysed at the roadside. He was receiving treatment for what they thought were potentially life-changing injuries and he was taken to New Cross Hospital, where he received treatment and bloods were taken.

“For some reason, the police were told that there was a five-month waiting list for the blood results.

Chohan of Fibbersley, Willenhall – gave a no-comment interview to police but later admitted his offending.

Ms Winzor added: “He entered an early guilty plea on the basis he was under the influence of alcohol and that he was travelling at speed. He accepts he was going faster than the speed limit.

“This was a head-on collision at speed. The defendant did not suffer as serious injuries as [initially] thought.”

The lorry driver was negative for both drink and drug-driving, the prosecutor told Wolverhampton Magistrates Court on Monday (January 10).

He turned to alcohol after his parents died in 2014 and 2015 and drinks excessively to ‘cope with life’.

The drink-driver had been attending Alcoholics Anonymous meetings and ‘actively tried’ to overcome his addiction, Mr Murria said.

Mr Murria added: “It’s difficult for Chohan to accept that he is a recovering alcoholic but that does not excuse the choices he made on that day.

District Judge Michael Wheeler said Chohan – who did not have a valid licence at the time – ‘had not learnt’ from his previous offending.

He handed Chohan a three-year driving ban and ordered him to pay a £128 victim surcharge alongside his jail-term.

Sentencing, he said: “You were driving a performance motor car at speed. You failed to negotiate a bend, you bounced off the kerb and you struck, head on, a vehicle coming in the other direction.

“Had it been a small motor vehicle driven by a vulnerable person, that collision could have easily resulted in fatal or serious injuries being caused.

“The lorry was sturdy enough that the collision caused no significant injuries to the driver.

“This is your third alcohol related motoring offence. On each of these occasions, you were given the opportunity to address your offending behaviour.

“The court is always sympathetic to defendants who come in with genuine addictions. People who suffer with addictions to alcohol do no need to and should not get behind the wheel when they have been drinking.

“There’s absolutely no excuse for getting behind the wheel of the car when you did and the offence is so serious that an immediate custodial sentence is the only option.”