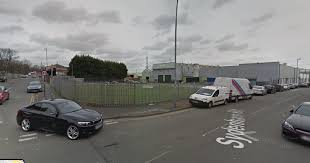 A car collided into two parked vehicles following a police chase after it failed to stop on Sunday 16 February around 10.30am in Sparkbrook

The driver a 19-year-old lost control and crashed into two vehicles parked at the junction of Anderton Road and Sydenham Road, outside the mosque, injuring himself and his passenger.

Both were taken to hospital and the driver will be interviewed by police in due course.

A West Midlands Police spokeswoman said: “We are investigating after a car which failed to stop for officers on Anderton Road at the junction with Sydenham Road in Sparkbrook, Birmingham, collided with two parked cars just before 10.30am yesterday (Sunday 16 February).

“The driver of the car was taken to hospital with leg injuries, where he remains today (Monday 17 February).

A ambulance spokeswoman said: “We were called to Sydenham Road by police to reports of a two car collision.

“It involved two teenagers. Two ambulances attended. Both males were treated at the scene before taking them to hospital.”