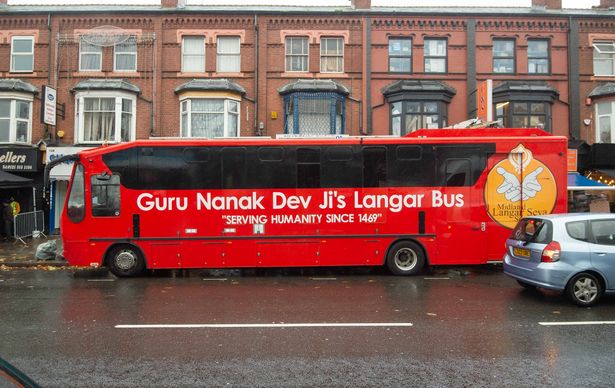 To mark the 550th birthday of Guru Nanak Dev ji on the 12 November, more than 334 free meals were handed out on Soho Road to help the homeless.

Midland Langar Seva Society, one of the biggest homeless charities in the UK, organised a special ‘street feed’ on Soho Road in Handsworth.

Volunteers were giving out free cups of Indian masala tea, there were information stalls giving a brief introduction to Sikhism and Guru Nanak and on a big red bus, people were being served langar while listening to live Kirtan.

The charity was built on the teachings of Guru Nanak Ji – to practice ‘seva’ – serving humanity and provide food and hunger relief to people in need.

Midland Langar Seva Society has become a gobal charity but as a Midlands founded charity, we wanted to do something in Birmingham – to spread the message of equality -where everyone is welcome to eat and we should all eat together. That is fundamental to Guru Nanak’s teachings.”

The Midland Langar Seva Society serves hundreds of hot meals to homeless and poor people every day across the UK as well as India, Germany and Bangkok.

It was set up in 2013 operating from the Glebe Centre in Walsall.

The society, which won a TSB Local Pride of Birmingham Award in April 2017, is a non-profit organisation that aims to help the homeless and provide food to those in need.