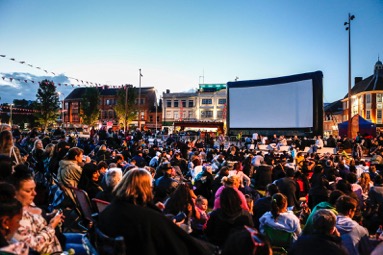 An outdoor screening of hit Bollywood film; Kuch Kuch Hota Hai will showcase across Leicester, London and Birmingham, three of the UK’s most diverse cities for the first time this August!

The free screenings, which are expected to attract over 6,000 people, will kick start in Leicester at Cossington Park on Saturday 10thAugust, followed by Boxpark Wembley in London on Sunday 25thAugust. The event will then conclude on Saturday 31stAugust at Bullring & Grand Central in Birmingham.

Prior to each screening, viewers can enjoy show-stopping dance performances by local students from each city, as well as sample delicious food from a variety of local vendors.

The outdoor cinema event is sponsored by Sony Entertainment Television, and is in partnership with Boxpark Wembley, Bullring & Grand Central and Birmingham Hippodrome, as well as radio partner, Sunrise Radio.

Jiten Anand, Director of An Indian Summer, said: “This year’s outdoor cinema is incredibly exciting because it’s never been done on this scale before. We see the event as a big step forward with what An Indian Summer will be producing in the future, in terms of pioneering work across the UK. We are also looking forward to sharing our Bollywood outdoor cinema with new national audiences.”