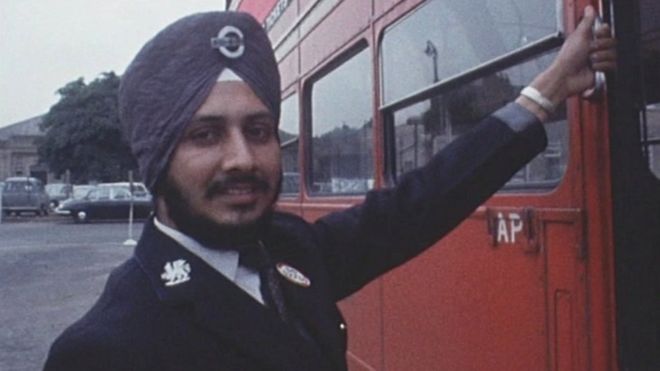 Sikhs working on Wolverhampton’s buses won the right to wear the turban at work, this was a long-running dispute during which one Sikh man threatened to set himself on fire.

It was a time when racial tensions there were high, with the city’s most famous MP Enoch Powell saying the country was “heaping up its own funeral pyre” by permitting mass immigration.

Mr Sandhu refused to remove his turban or shave his beard and sparked a row that spread across the world and saw the nation’s racial tensions and identity politics played out on Black Country double-deckers.

“I couldn’t see anyone in Wolverhampton at that time with a turban,” remembers Mr Sandhu, who arrived in the Midlands in his 20s more than 50 years ago.

Wolverhampton was different back then, he said. He remembers the racism, the teddy boys, and when he plucked up the courage to wear his turban, colleagues wearing crude mockeries on their heads.

Soon after arriving, he was pinned down by uncles who cut his hair against his will.

He would never get a job with a turban, he was told.

At 23, he began working as a bus driver with Wolverhampton Transport Committee which at the time employed 823 drivers, 411 of whom were Indian.

They all had signed the uniform policy, agreeing to come to work clean shaven and wearing the uniform cap. None of them wore a turban.

1967, Mr Sandhu returned to work  after a short illness complete with turban and beard.

Hair is one of the five Sikh articles of faith for the Khalsa – it must not be cut and is maintained in a turban – and Mr Sandhu decided he could not forgo his religion for the sake of a bus driver uniform.

After one round trip, he was sent home to shave. He refused.

“I never thought it would be as big a dispute as it was,” Mr Sandhu said, “because there was nothing wrong with what I was doing.”

Mr Sandhu was sacked from his job and his act of rebellion sparked a row that changed Britain and helped get rid of the ban on wearing turban and keeping a beard at work.

Mr Sandhu a former bus driver who still lives in Wolverhampton, modestly said his actions, which went on to change legislation about religious expression at work, were “natural”.