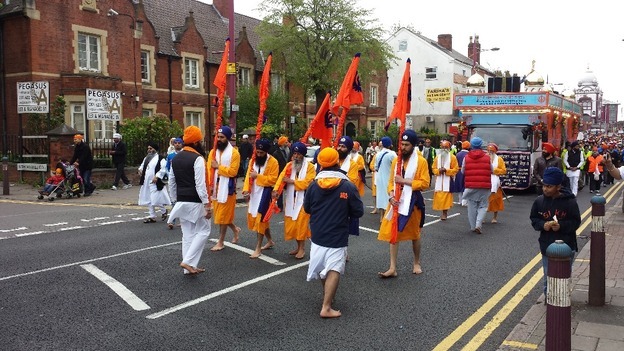 The largest Vaisakhi celebrations is taking place in Birmingham this weekend there will be road closures in place.

Two processions will take place on Sunday 28 April – one from Hockley in Birmingham, the other from Smethwick and both will head towards the site of a massive free festival in Handsworth Park.

The event marks the anniversary of the founding of the order of the Khalsa into which worshippers are initiated.

The date of Vaisakhi was on April 14 and public events are often organised on different dates.

Over 100,000 people take part in the Birmingham celebrations, which are open to everyone.

The closures of the roads will take effect to allow the processions and festivities.

One procession sets off from the Gurdwara Ramgarhia Sikh Temple in Graham Street, Hockley, Birmingham, at 10am, arriving at Handsworth Park at 12.30pm.

The other procession sets off from Gurdwara Baba Sang in St Paul’s Road, Warley, at 10am and arrives at the park at 1.30pm.

A Birmingham City Council spokesman said: “There will be rolling road closures along the two procession routes, so sections will reopen as people make their way towards Handsworth Park for the celebrations.