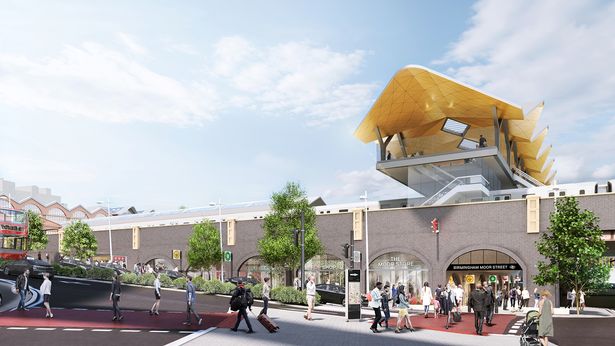 Moor Street station in Central Birmingham is set to undergo a major renovation which will see two new platforms built to cope with the expected increase of five million passengers per year by 2043. Transport chiefs reveal early concepts which could see new platforms and a public square to connect station to HS2. 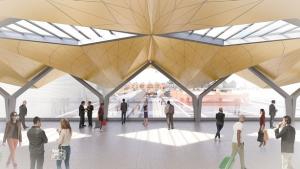 The city centre station which will still retain its historic grade II-listed entrance from 1914 while a second access point will serve Digbeth and the new Smithfield development.

The propositions also include the option to more than double the size of the concourse to 21,525 sq ft.

There are also several options to improve pedestrian access between Moor Street and New Street, including a direct route via St Martin’s Queensway, and steps and a ramp at Swan Passage adjacent to the new Primark.

There could also be a new ramped route from Rotunda Square to New Street station.

The new platforms will, alongside other network infrastructure improvements, allow extra services to stop at Moor Street from across the region under the ‘Midlands Rail Hub’ proposals to increase rail capacity to and from the East Midlands, Hereford, Worcester and the South West.

Passenger numbers at Moor Street are expected to grow from seven million to 12 million a year by 2043, with further increases expected as a result of the Midlands Rail Hub and the arrival of HS2 in 2026.

West Midlands Mayor Andy Street said: “We have big plans for transport in the West Midlands and the expansion of Moor Street is a crucial part of that.

“Our game-changing plans for HS2 and new metro and rail lines are already driving investment, new jobs and apprenticeships as well as bringing communities closer to those work, training and education opportunities.

“This whole area of Birmingham will be revitalised over the next few years as the world’s largest Primark opens, Curzon Street HS2 station is built and Moor Street is transformed.

“This vision for Moor Street will not only provide a better experience for commuters but, with two extra platforms, it will set the foundation for the future expansion of rail services.”

The aim is to create seamless access between the new HS2 terminal in Curzon Street, Moor Street and New Street as part of the so-called ‘One Station’ strategy.