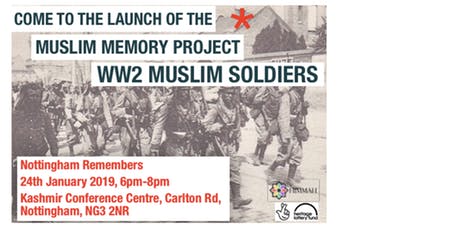 On Thursday 24th January Himmah will be launching a new project, made possible thanks to National Lottery players through a Heritage Lottery Fund grant, which will remember the role played by the local Muslim community during the Second World War.

The launch will be on Thursday 24th January 2019 6pm to 8pm at the Kashmir Conference Centre, Carlton Road, Nottingham NG3 2NR

The Muslim Memory Project: Our Heroes; is Himmah’s heritage project which will explore and archive the contribution of WW2 Muslim Soldiers who have been living in Nottingham.

The project will be working with local schools, galleries, including the New Art Exchange, and Nottingham archives to record, archive and teach people about this important story from the local Muslim community.

This comes at a time when Islamophobic and other hostile voices often ignore or mis­characterise the Arab and Muslim participation in the war. In reality, over half a million Indian Muslims enlisted in the British military during the conflict. At least one-third, if not more, of the British “Indian Army” that fought during the war on many fronts were Indian Muslims – a disproportionately high percentage.

On Thursday, Himmah will be launching project with a number of keynote speakers including, Andrew Gwynne MP (Shadow Secretary of State for Communities and Local Government) and Jahan Mahmood (Military Historian).

Sajid Mohammed, Director of Himmah says, ’this is an important project which will uncover, document and archive our local history from the Muslim community, which have remained buried for decades. It is also important because I know from experience that so many important local people have passed in recent years, whose contribution to the rebuilding of Nottingham, and Britain, has not been acknowledged and this project will allow us to remember them, and we can pass this knowledge onto to the next generation to local people.’

“I’m delighted to be speaking at the launch of the Muslim Memory Project – the contribution of hundreds of thousands of Muslims from across the Commonwealth during the Second World War must be remembered.

As Shadow Communities Secretary I am humbled be part of this essential project which seeks to preserve the vital contribution of Muslims from the world over to Britain during the Second World War, as well as educating generations to come.

Few, if any, families were unaffected by the Second World War and we simply cannot afford to forget them or their sacrifices.”

Jonathan Platt, Head of HLF East Midlands said: “National Lottery funding has helped communities across the East Midlands to record and reveal their heritage. This project enables Himmah to address a gap in our collective knowledge: the contribution of Muslim World War 2 servicemen to the war effort; their and their families’ experiences of living in the East Midlands; and their role in re-building the country.”