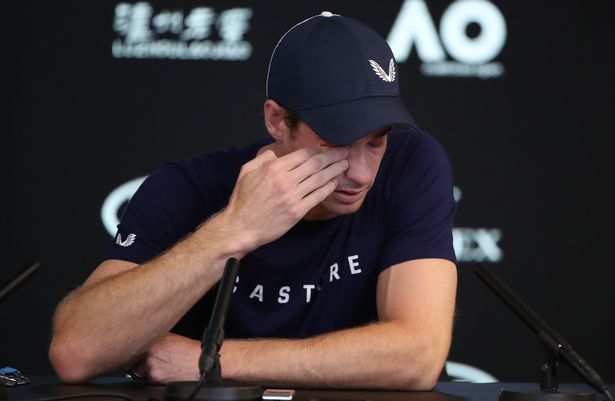 Britain’s greatest tennis player Andy Murray emotionally announced on Thursday 10 January he is planning to retire and next week’s Australian Open could be the final tournament of his career.

Murray has battled to recover from a chronic hip condition for more than 18 months, undergoing surgery in Melbourne a year ago, but was forced to admit in a tearful press conference that his efforts have not been enough.

Murray was on the verge of breaking down as he entered the press room and, asked how his hip was feeling, managed to say “not great” before overcoming by his emotions and having to walk out of the conference.

He returned after several minutes to deliver his devastating news, saying: “Obviously I’ve been struggling for a long time. I’ve been in a lot of pain for about 20 months now.

“I’ve pretty much done everything that I could to try and get my hip feeling better and it hasn’t helped loads. I’m in a better place than I was six months ago but still in a lot of pain. It’s been tough.”

Murray will contest his first-round match against Spain’s Roberto Bautista Agut on Monday but that may prove to be the final match of his illustrious career.

“I can still play to a level.

“Not a level that I’m happy playing at.

“But it’s not just that.

“The pain is too much really and I don’t want to continue playing that way.

“During my training block (in Miami last month) I spoke to my team and told them I can’t keep doing this.

“I needed to have an end point because I was sort of playing with no idea when the pain was going to stop.

“I said to my team, look I think I can get through this until Wimbledon.

“But I’m also not certain I’m able to do that.”

After another pause while Murray sat with his head on the desk, he was asked whether this might be his last tournament.

“Yes I think there’s a chance of that for sure because I’m not sure I’m able to play through the pain for another four or five months,” he said.

“I have an option to have another operation, which is a little bit more severe than what I’ve had before in having my hip resurfaced, which will allow me to have a better quality of life and be out of pain.

“Some athletes have had that and gone back to competing but there’s obviously no guarantees with that and the reason for having an operation like that is not to return to professional sport, it’s just for a better quality of life.”

The hip problem first emerged after his French Open semi-final loss to Stan Wawrinka in June 2017, although Murray revealed as he limped through Wimbledon that he had been managing a condition for a number of years.

“I have a severely damaged right hip,” said Murray.

“Having the operation last year was to give it the best possible chance of being better.

“I have been playing with hip pain for a number of years, it wasn’t as if it just started at the French Open after my match against Stan.

“It got to a level where I didn’t recover from that match, pushed it over the edge.

“Having the operation would hopefully make it as good as possible.

“It didn’t help with the pain at all.

“There are certain things on the court I cannot really do properly now, but the pain is the driving factor.

“I can play with limitations, that’s not an issue, it’s having the limitations and also the pain is not allowing me to enjoy competing, training or any of the stuff I love about tennis.

“I have tried to deal with it, talked about it, but none of that makes my hip feel better, unfortunately.

“I wish it did, because if it did, it would be feeling brilliant right now.”

It is especially cruel that the problem emerged only a few months after Murray ascended to the top of the world rankings, cutting short a career that looked like it had a lot more to give.