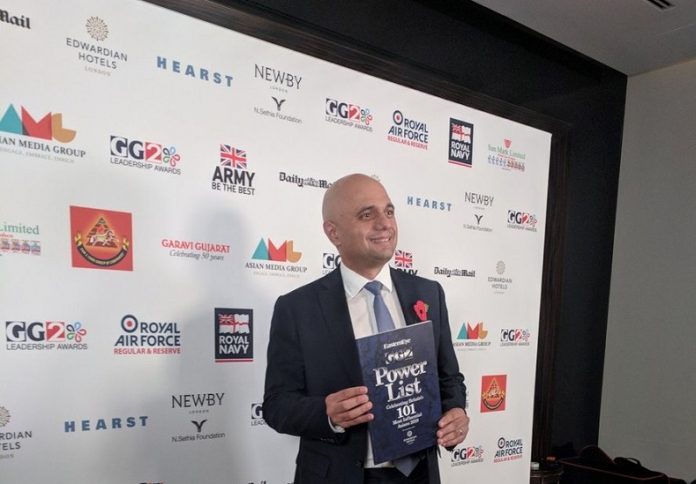 The landmark 20th anniversary GG2 Leadership Awards saw a double triumph for Sajid Javid MP. The Home Secretary was honoured with the Hammer Award, an accolade presented to a high achieving individual who has shattered the proverbial glass ceiling. The GG2 Leadership Awards showcase ethnic achievement, talent and leadership in the UK.

“It is an incredible honour to be the first Asian Home Secretary in our country’s history – and I’m immensely proud to get an award in acknowledgement of breaking the glass ceiling.

I want to pay tribute to all the nominees and winners. They are inspirational role models who represent their communities and epitomise ethnic achievement, talent and leadership in Britain.”

Sajid Javid also topped this year’s GG2 Power List, a glossy annual publication which is revealed every year on the night of the GG2 Leadership Awards and profiles the 101 most influential Asians in Britain.

On a glittering evening hosted by British TV and radio presenter June Sarpong at London’s Park Plaza Westminster, some of the UK’s most prominent community leaders and achievers were celebrated.

Winners of the GG2 Leadership Awards include –

Man of the Year Neil Basu, assistant commissioner of specialist operations for the Metropolitan Police, who also features as a new entry at no.3 on the GG2 Power List. Basu took up this position earlier this year and is responsible for leading counter-terrorism policing nationally, widely regarded as the toughest job in British policing.

Pride of Britain Award winner Dame Pratibha Gai, Professor and Chair of Electron Microscopy at the University of York.

Established by Britain’s biggest Asian publishing house, the Asian Media Group (AMG), the GG2 Leadership Awards brought together an array of luminaries, celebrities and distinguished guests on a night of celebration and recognition.

Shailesh Solanki, Executive Editor, Asian Media Group added: “This year’s winners are an exceptional group of individuals who have excelled in their relevant sectors and have become successful and inspirational role models for their

communities and wider communities around the UK. The GG2 Leadership Awards, now celebrating its 20th year, remain an important event which celebrates diversity

in the UK. Our nominees and winners have shown tremendous

achievements which have made a positive impact on the country.

“Sajid Javid is an incredible role model to young people all over the country and has been a fantastic Home Secretary. He is indeed a very worthy winner of our top honour, the GG2 Hammer Award. Congratulations to all the winners and nominees of this year’s awards and to all who have established themselves in this year’s GG2 Power List.”

This year’s nominees and winners come from a wide variety of backgrounds, and professionals from in the fields of business, politics, creative arts, media, medicine and law were celebrated.

The GG2 Leadership Awards and the reveal of the GG2 Power List were a culmination of a day in which the GG2 Diversity Conference also took place and saw both corporate and community leaders come together to discuss the importance of diversity, inclusion and representation in the UK on a variety of panels.

GG2 Leadership Awards 2018 – The Full list of awards and nominees:

Awarded to an individual or organisation for outstanding work in the community.

Awarded for outstanding work in the media.

Awarded for exemplary achievement in the creative industries.

Presented to an individual or organisation for outstanding work in the community, which has served to inspire young people.

leadership, brings about change and who is an inspiration to communities.

Awarded to an individual who has made an outstanding contribution to the field of medicine.

Awarded to an individual who has made an outstanding contribution to the legal profession.

Awarded to an individual for outstanding contribution to society.

Awarded to an individual who has made an outstanding contribution to multicultural Britain. This award is presented by the editors of Eastern Eye newspaper.

Awarded to an individual who has made an outstanding contribution to multicultural Britain. This award is presented by the editors of Asian Media Group.

Awarded to an individual for consistent high achievement.

Awarded to an individual for consistent high achievement.

Awarded to an individual who has broken through the glass ceiling.