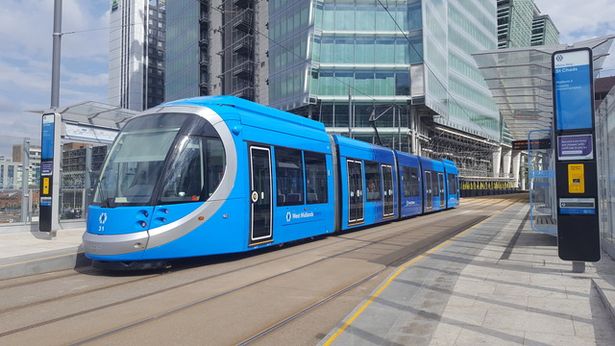 The new identity of Transport for West Midlands is to all change with blue trams, red buses and orange trains the mayor has announced.

Earlier this month the city had the unveiling of one of the brand new blue trams in Birmingham, Mayor Andy Street has revealed plans for other modes of transport to follow suit.

Over the next few years trains, cycles and buses will all be given the same logo each with their own specific colour in the centre.

The new logo is similar to the West Midlands Combined Authority and features a hexagon with a colour in its centre.

“So the really big question is why are we doing it? And the key thing in response to that is that this is the start,” the mayor said.

“So it’s not all going to happen overnight suddenly, but it’s actually the moment in time where we say ‘we are steadily going to bring all of this together as one transport brand’.

“And the brand is synonymous with the one network, so it’s a way of thinking that all this lot fits together. So if you’re a customer you’ll think ‘my different options for transport in the Midlands are; West Midlands rail; West Midlands Metro; West Midlands bus and, we hope, West Midlands cycle.’

“And you never know what else, as technology moves on in the future. So you’re thinking about all of the options you’ve got and using them together.

“And the evidence from around the world is that if you do that, then you get increased usage of public transport, where people can identify the network.”

The cost of the initial design work was £60,000, with each tram costing around £9,000 to have its branding overhauled

But the mayor thinks that, while the cost would seem important, it’s a small investment toward building a brand that will be synonymous with transport in the region.

“The initial branding work is a very important stage,” he said.

“If you think of London and its famous symbol, it’s iconic, and I want the West Midlands hexagon to have the same recognition as that. That’s how we know when we’ve made it.

“When people see that, we want them to know what it means. Because it’s not just about it being on the vehicle.