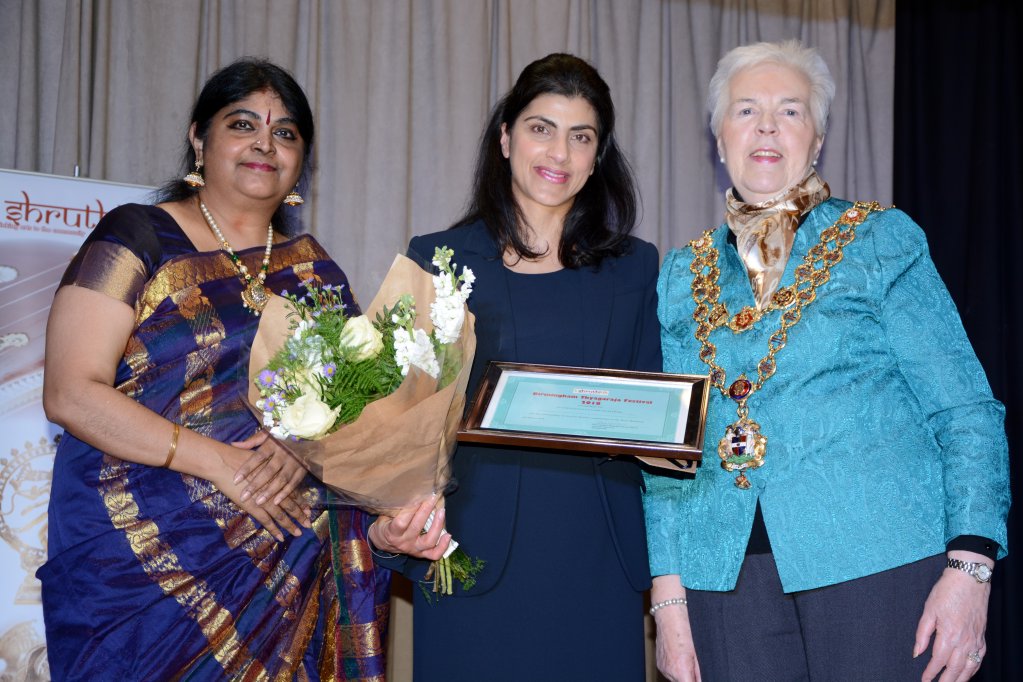 The most senior Asian woman at West Midlands Police has been recognised for her services to diverse communities across the region.

Harvi Khatkar, who received her accolade as part of International Women’s Day, has held a number of roles since joining the force in 1993. First as Neighbourhood Policing Officer and currently as Superintendent.

Accepting her honour, Superintendent Khatkar said: “I am absolutely thrilled and this has come as a huge surprise. While I wholeheartedly accept this award, I attribute this to my colleagues at West Midlands Police who collective dedication and commitment to making our region safer for us all is next to none. I am genuinely humbled.”

Also honoured was Her Majesty’s Vice Lord-Lieutenant for West Midlands, Dr Beverly Lindsay OBE OD DL. Born in Jamaica, Dr Lindsay came to British shores as a teenager. In 2011, she was awarded an OBE for her services to business and to the community in Birmingham.

The BTF is dedicated to Thyagaraja, one of the legendary composers of Indian and Carnatic classical music. Thyagaraja is also known as the singing saint who composed thousands of devotional hymns – most in praise of Lord Rama, the Hindu God – many of which remain popular today.

Scores of people of all ages and abilities took part. Performers included schoolchildren, students from University of Cambridge, surgeons, doctors, dentists and those from the IT and other professional sectors.  Performers had travelled from Scotland, New Zealand, Sweden and other parts of Europe and the UK.

Lord Mayor of Birmingham, Councillor Anne Underwood, said: “I am proud to be part of such a vibrant and culturally diverse city, and to be able to participate in events such as the wonderful Birmingham Thyagaraja Festival. I congratulate everyone involved and thank the organisers for inviting me.”

The Mayor of Solihull, Councillor Stuart Davis, said: “Events like this bring us closer together providing an ideal platform to share and learn from one another. I’m proud of Solihull’s increasing diversity and would encourage more people to support and get involved in such events.”

Shruthi UK, which is in its 13th year, is the brainchild of Dr Chithra Ramakrishnan, who hails from a family of talented musicians and is a Fellow of the Royal Society of Arts, (RSA).

The family-friendly event featured a series of vibrant song and dance performances, speeches from dignitaries, certificate and other presentations and a South Asian vegetarian meal. The evening also saw a charity raffle, proceeds of which will be equally divided between the British Heart Foundation and Promoting Organ Donation (POD) UK.

Shruthi UK aims to inspire and motivate people from all ages and backgrounds but particularly those from disadvantaged backgrounds. For example, it has in the past organised workshops for autistic children and young adults, supported by Autism West Midlands and is currently working with people with dementia in an attempt to help improve their cognitive skills and general well-being through holistic healing through Indian dance. Shruthi UK also works closely with Special Needs schools across the region and beyond. For more information visit www.shruthiuk.com