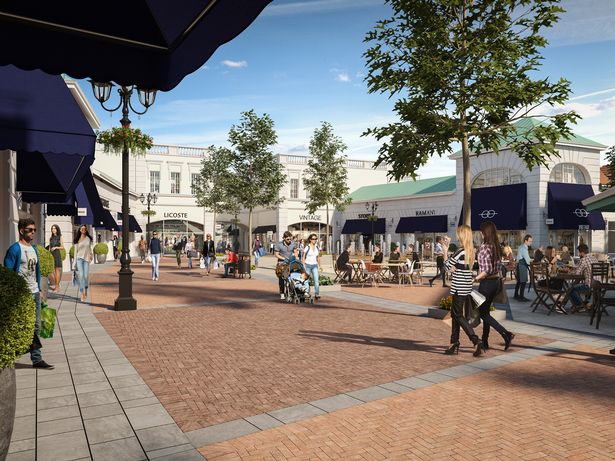 The preparations for the new Bicester-style designer shopping village in the Midlands has begun.

The £160 million McArthurGlen Designer Outlet Village, formerly known as Mill Green is planning for a grand opening for 2020, when more than 80 stores will launch together with restaurants and cafes, a children’s play area and 1,400 parking spaces and views over Mill Green Nature Reserve.

New images that’s have been released which gives more of an idea of what the Cannock outlet village will really look like.

The entrance will feature a clock tower and blue canopies over the shops.

It has a regency style feel to it, similar to the entrance to a historic manor house or heritage train station.

A grand white archway will form the entrance into the village.

Shops with blue canopy frontages will also line the entrance, which comes straight from the car park.

Architects are said to be taking inspiration from the surrounding area to create a “retail destination with a distinctive identity”.

The village will cover 26,500 square metres and be home to 130 discount designer shops, together with restaurants, cafes and a children’s play area.

The area is now being prepared for the development, which will be run by McArthurGlen and U+I.

It will be the seventh McArthurGlen outlet in the UK – and it’s around a 30 minute drive from Birmingham.

Developers say the Cannock village will be more like outlet villages seen in Europe rather than the UK.

No brands have been confirmed but the developers are saying they plan to bring labels currently only found in places such as Bicester Village, which boasts more than 160 designer brands like Burberry, Prada, Fendi, Gucci and Stella McCartney.

A possibility of a cinema is in talks.