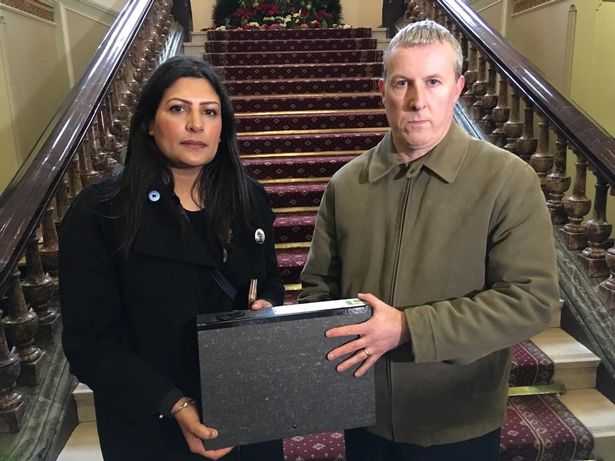 The brother-in-law of one the victims from the Lee Bank Middleway crash victim handed in a road safety petition to councillors with 28,000 signature and said: “The whole family is utterly devastated.”

Tony Worth and other campaigners handed in a petition with 28,000 names calling for road safety improvements on the busy stretch of road with the aid of Preet Gill MP for Edgbaston.

Tony is brother-in-law of Lucy Davis , 43, who was one of six people killed in the tragedy on December 17.

Mum-of-two Lucy, a sign language interpreter, was killed alongside her scientist partner Lee Jenkins, 42, and taxi driver Imtiaz Mohammed, 33, when his cab collided with an Audi.

They handed over the huge petition to council leader, Ian Ward.

“The whole family are utterly devastated and struggling to come to terms with what happened,” said Mr Worth, from Coventry.

Ms Gill, who has been working closely with Ms Davis’s family, added: “The family are still devastated and picking up the pieces.

“They would like everyone to respect just how difficult it has been for them.

“As a family, they would like the council to take measures so that no one has to go through this again and that stretch of highway is made safe.

“I’m saying to the council, can we look at some interim measures such as CCTV, traffic calming measures and more signage?”

Coun Ward said: “I thank Preet for the work that she has been doing to help the family. It’s unusual for the council to receive a petition with 28,000 signatures and we will now give consideration to the petition.

Inquests into the deaths will start on May 29 before Birmingham Coroner Louise Hunt.