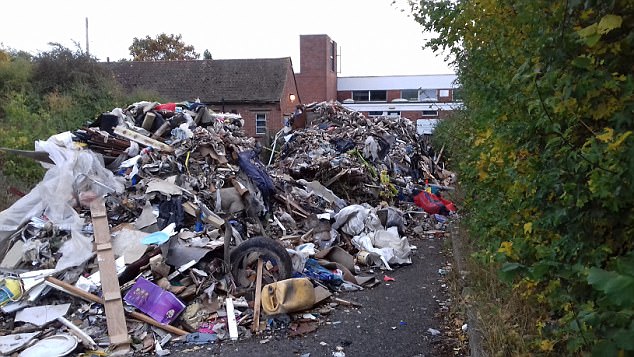 At a cost of £58m, more than one million incidents of fly-tipping were dealt with by councils in England in 2016-17.

It was the fourth year in a row that incidents increased.

Around 56,000 fixed penalty notices were handed out by councils to people caught illegally dumping.

The Department for the Environment, Food and Rural Affairs (Defra) said household waste accounted for two-thirds of fly-tipping.

There was a slight decrease in the number of enforcement actions taken by councils, such as investigations and warning letters.

In May of last year, all councils across the country were granted additional powers that allowed them to give fixed penalty notices for fly-tipping as well as their existing powers to use them for littering and anti-social behaviour.

Birmingham-based meat firm Premium Halal Meat & Poultry was prosecuted at the city’s magistrates court in July 2016 and given the biggest financial penalty of the year – £25,541.

The company had to pay a fine and costs after being prosecuted by Birmingham City Council.

The most common place for waste to be dumped was at the side of the road.

In a report accompanying the statistics Defra said, “Many local authorities have started to improve the way they capture and report fly-tips over the past few years, so the increase over time should be interpreted with some care.”

A Defra spokesman said: “Fly-tipping is an unacceptable blight on our landscape, which is why we have cracked down on offenders by strengthening sentencing guidelines and giving councils the powers to hand out on-the-spot fines to fly-tippers.

“We have made it easier for vehicles suspected of being used for fly-tipping to be stopped, searched and seized and will continue to work with local partners to stop this inexcusable crime.”

The Local Government Association, which represents councils, said cleaning up fly-tipping was diverting money away from other services.

Its environment spokesman Martin Tett said, “The Government has responded to our call for councils to be able to apply Fixed Penalty Notices for small scale fly-tipping – and this is a big step in the right direction.

“When they take offenders to court, councils need a faster and more effective legal system which means fly-tippers are given hard-hitting fines for more serious offences. Manufacturers also need to provide more take-back services so people can hand in old furniture and mattresses when they buy new ones.”