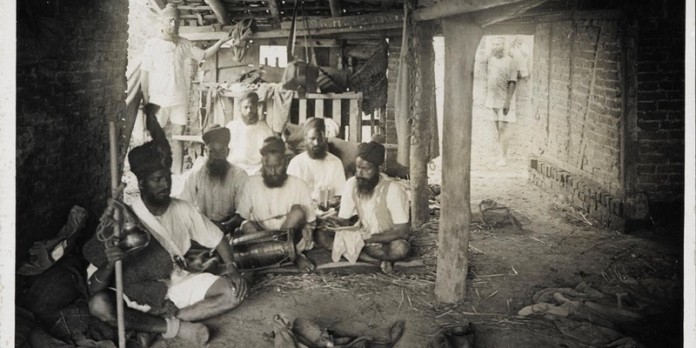 Presented by Alchemy and SAA-uk in association with The Network of Sikh Organisations, U.K.

Sacred Sounds tells some of the largely forgotten stories of British India’s role in the First World War.  Over one million Indian combatants and non-combatants participated in this devastating war.  Of these just under 100,000 were Sikhs – an astonishingly high number – considering they represented a tiny percentage of India’s population.  Inspired by an evocative photograph of Sikh soldiers performing Gurbani Kirtan or Shabads (Sikh sacred hymns) in a French barn, this live concert showcases the music that Sikh soldiers took with them to camp and battlefield.

The concert explores some of the many narratives of this period – the timeless and transcendent beauty of the Shabads themselves, originally composed by Guru Nanak (1469-1539) the founder of the Sikh faith; the power of the letters, exchanged between Sikh soldiers and their families and the vivid individual stories they tell; the forthright and often anguished voices of the women of the Punjab through fragments of folk ballads – including a mother’s lament for a departing son; the brusque recruitment songs that the British commissioned as well as new spoken word elements. Sacred Sounds is further brought to life by award-winning writer, artist and film-maker Imtiaz Dharker’s vivid poetry and images, enhanced by Jack Lockhart’s animation. A cinematic backdrop of images promises to make this a thought provoking and memorable experience.

Nima Poovaya-Smith, Director of Alchemy says: “By the end of the war the Punjab alone had contributed nearly 450,000 Muslim, Hindu and Sikh combatants and non-combatants; just under 100,000 of these were Sikhs recruited from different villages of the Punjab. The source of inspiration for this project was primarily the Sikh Shabads.  They provide a luminous framework for other records. These include the voices of the Sikh soldiers and their families and friends through letters exchanged – expressing hope, stoicism and the sorrow of separation.  These contrast with the harsh pragmatism of the recruitment songs, used by the British to encourage people to enlist.”

The voices of the Sikh soldiers [expressed] hope, stoicism, separation.  These contrast with the harsh pragmatism of the recruitment songs, used by the British

She goes on to note: “The Sikh contribution to music is quite remarkable considering the fact that they are not a large community.  They have made a distinctive contribution not only to vocals, strings, keyboard and percussion but in the past, have also played on brass instruments and bagpipes through their role in the British army. Imtiaz Dharker’s wonderful responses to a number of the images and letters from that period give us a fresh contemporary perspective, as does Robert Green’s spoken word performance in the Prologue.”

Mohinder Singh Chana, member, The Network of Sikh Organisations, U.K. added: “I’m very pleased that this project is happening.  The contributions of Commonwealth soldiers, including Sikh soldiers, in the two World Wars, tend to get overlooked in mainstream coverage of commemorative events.  Sacred Sounds throws interesting light on this aspect of our history.”

The contributions of Commonwealth soldiers, including Sikh soldiers, in the two World Wars, tend to get overlooked in mainstream coverage

Keranjeet Kaur Virdee, Director, SAA-uk says: “I’m delighted to be involved with this project, not least because a number of young people who trained in the SAA-uk summer schools, weekend workshops and masterclasses are now well-established names on the U.K. music scene including Keertan Kaur Rehal, and Prabhjot Singh Gill.  Maestros, such as Kirpal Singh Panesar and Vijay Venkat, have conducted a number of masterclasses for SAA-uk.  It is wonderful that these artists are coming together with other artists such as Christella Litras, Ravneet Sehra and Joe Williams to create a new body of work.”

On Wednesday, 11th October 2017, the partners involved in Sacred Sounds are mounting an International Conference at the Royal Armouries in Leeds.  The conference will explore the fascinating stories behind the making and showcasing of Sacred Sounds involving artists, historians, academics, arts administrators and above all communities of people, particularly the Sikh community.

The salons showcase some of the Shabads, vocals and spoken word performances from the main concert, followed by discussions with artists about their creative journeys.