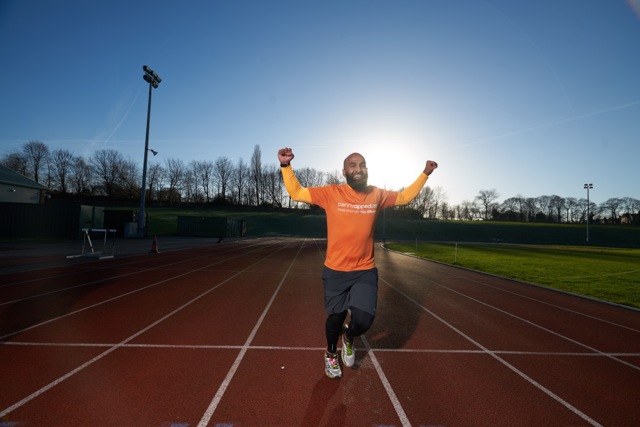 He is hoping to raise £20,000, towards a solar panel which will provide water and electricity to people living in Senegal. Haroon will be running the London, Paris, Manchester and Boston Marathons. Thirty one year old Haroon is affectionately known as ‘Marathon Man’, and decided to take up running again to honour the memory of his late father.

“Running the 2012 London Marathon was supposed to be a one off as it was such a painful and exhausting experience. I told myself I would never run again. But after my father was killed in a car accident in 2013 I put on my running shoes again and was compelled to dedicate every mile and every step towards goodness, in his memory. My father, Hafiz Kasim Mota, was always striving to make life better for others. He is my motivation and I am very determined to make this challenge a success to make him proud.”

Haroon has adopted the slogan, #Running4Dad and hopes that people will be inspired by his stamina and sponsor him.

“I want everyone to help me reach my target and bring long term support to poor and needy communities in Senegal. If I can find 200 people to give just £100, that would be more than enough to complete the project. Alternatively, you could sponsor me £1 or £2 for every mile that I will race”.

Haroon has run over thirty marathons since taking up running just a few years ago, and he’s always up for a challenge. Haroon has climbed to Mount Everest Basecamp, trekked the Inca Trail in Peru, completed the Three Peaks Challenge, Skydived and Bungee jumped, raising hundreds of thousands of pounds for various causes. Through these sporting activities he has championed humanitarian causes, whilst hoping to provide positive stories about Muslims and their contribution to such causes, a subject he feels strongly about.  He says,

“So many news pages are dominated by negative stories about Muslims – I want to show that Muslims are generous and contribute significantly towards society at large.”

You can support Haroon by donating at www.justgiving.com/MarathonMota or by texting “MOTA60 £” to 70070.