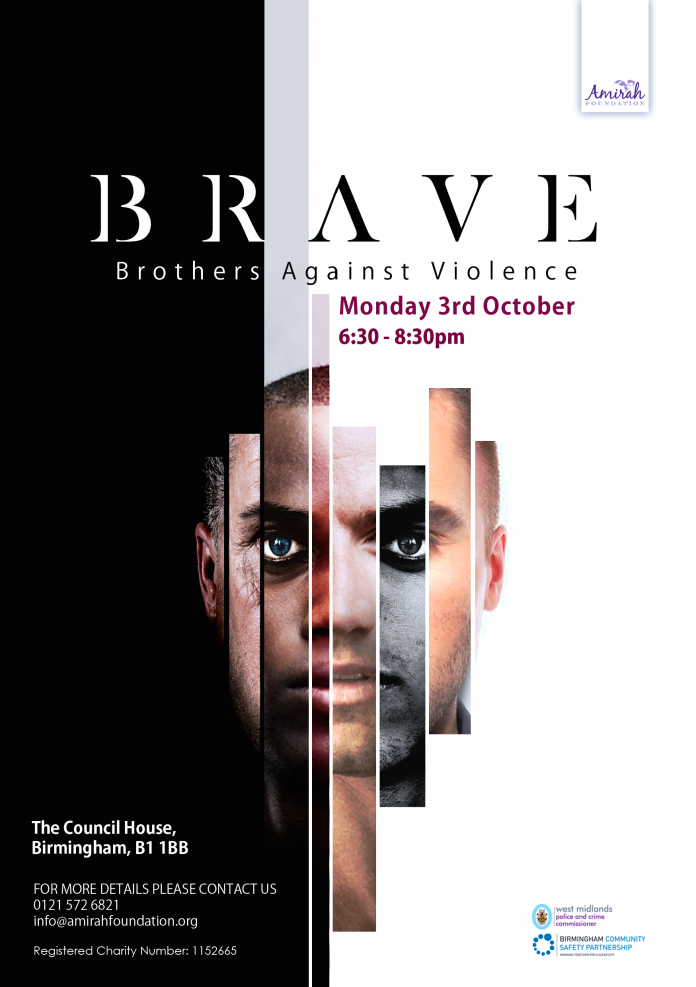 The Amirah Foundation is bringing forward a new campaign, called Brothers Against Violence, in a bid to tackle domestic abuse and raise awareness for violence against women.

Supported by the Birmingham Community Safety Partnership, BRAVE is a yearlong programme that encourages men to take a stand against domestic violence. The programme will provide a safe space intended for men to discuss abuse issues and voice their opinions and standpoints.

Domestic abuse runs rife in all social classes, ethnicities and backgrounds. Current stats show that 400 people a year commit suicide due to suffering from domestic abuse. 1 in 4 women are affected in their lifetime and 1 in 6 men in theirs.  Most shockingly, an estimated 2 women are murdered on average a week.

“I am pleased to be able to support this exciting new initiative from the Amirah Foundation which seeks to involve men in the campaign to end violence against women.

“Violence against women in the UK has been increasing since the economic downturn and we are now seeing unprecedented demand for services. Birmingham City Council is working with partners to develop a new domestic abuse prevention strategy for the city.

“The time has come for us to be working across the city to change hearts and minds and to make sure that men are fully involved in driving this change.

“I would therefore like to encourage you to attend this ground-breaking event which will be facilitated by Alyas Karmani, an international speaker, who has years of experience of engaging men in the fight to stop the violence.

To find out  more about the event or to book your place, click here: https://www.eventbrite.co.uk/e/brave-brothers-against-violence-tickets-27191103322