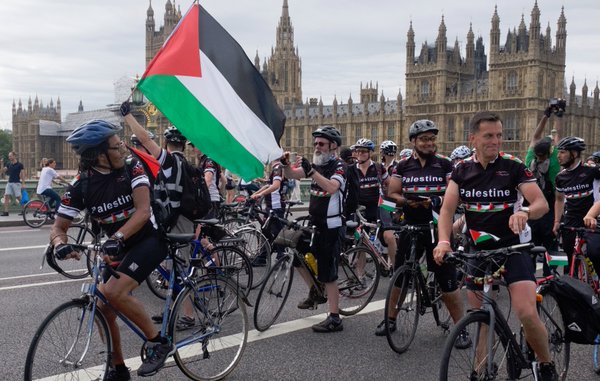 A mobile protest by hundreds of cyclists converges on the Midlands next weekend to draw attention to the siege conditions for Palestinians in Gaza. According to organisers, the protest aims to highlight “a trade in death that implicates the British Government in the killing of innocent civilians.”

Big Ride cyclists from four corners of England wheel into Birmingham on Sunday 7th August to support a Palestine fun day in Sparkhill Park. The following day they move on to protest outside the controversial UAV factory in Shenstone, near Lichfield which produces aircraft engines for drones which are exported to Israel.

The date has been chosen as the second anniversary of the Israeli Government’s 51 day bombardment of Gaza in 2014 that resulted in the death of 547 children under the age of 12.

The riders are covering hundreds of miles from London, Bristol, Manchester and Sheffield to raise awareness about Gaza en route to Birmingham.

At Shenstone, they will hear speeches by opponents of the arms trade with Israel, and from Palestinian Dr Mona El-Farra who works with children in Gaza traumatised by successive waves of bombings by the Israeli Government.

Dr Mona, the vice-President of the Red Crescent Society for the Gaza strip, said of The Big Ride cyclists: “You are bringing hope to millions of Palestine children for whom life has been scarred by trauma and fear.  You are siding with millions of displaced 1948 Palestinian refugees who still have the keys to their homes from which they were uprooted by force.

“You are breaking barriers that separate human beings who should be equal regardless of race, colour or religion. We dream of a day when we can welcome you to cycle in free Palestine to enjoy the beauty of our country that has been devastated by long decades of Israeli occupation, disposition, and annihilation. We appreciate your solidarity; we salute you all for your humanity.”

High profile support for The Big Ride cyclists, who last year raised £67,000 for the Middle Eastern Children’s Alliance to help Palestinian children, has come from MEPs, MPs, trade unions and faith and campaigning groups, along with individuals such as film director Ken Loach.

Loach, who hails from Nuneaton, said: “Israel continues to steal land from Palestinians, destroys their houses, imprisons their children and makes their daily life intolerable. Israel ignores United Nations resolutions and is in breach of the Geneva Convention.

“In recent years there is overwhelming evidence of war crimes committed by Israel in Gaza: the wanton killing of civilians, the deliberate targeting of schools and hospitals, destruction of houses and collective punishments. All this happens with the open support of Israel’s powerful allies in the west.”

Loach urged renewed support for the Boycott, Divestment and Sanctions campaign, aimed at putting pressure on the Israeli Government and opposing arms deals that target civilians.

John Goss, aged 71, a cyclist from Birmingham and himself a former engineer is one of The Big Ride organisers. He said: “UAV supplies Israel, and other countries, with military drone engines used in extra-judicial killing. UAV’s own boast is: ‘To-date we have flown in excess of one million flight hours operating on thirty different platforms in 25 different countries under most arduous and demanding conditions.’ www.uavengineslimited.co.uk/development/

“Of course what this does not say is that in these ‘field-tested’ flights those killed by their products have never stood trial. Even if the victims were guilty it is estimated that of those killed in drone attacks less than 10% are the intended targets meaning that more than 90% of those killed are innocent. And that is murder on a mass scale.

“The site on which UAV Engines stands was once a motor-cycle manufacturer of BSA Norton bikes, a far better use of technology both for the workforce, Britain balance of payments and, not least the Palestinian people. We can turn swords into ploughshares.”

Dermot McWard, a cycle tour operator, who helped initiate The Big Ride said: “Once again this year we have been overwhelmed by support for what the cyclists are doing. Stop the War, Campaign against the Arms Trade, War on Want, Friends of Al Aqsa, Jews for Justice for Palestinians and the Palestine Solidarity Campaign.

“We want everyone to join us in a mass, peaceful protest outside UAV Engines, at Shenstone, near Lichfield on Monday 8 August at 12noon. UAV is part of the Elbit Group, Israel’s largest private arms manufacturer. It cannot be right that  this trade in death is treated as business as usual. The blood of Palestinian children is surely on the hands of the British Government.”